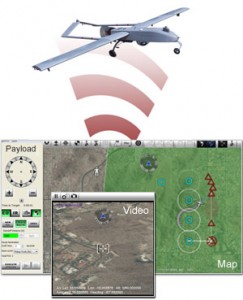 “Our UAS Control Segment (UCS)-compliant Bi-Directional Remote Video Terminal (BDRVT®) made headlines recently with the successful flight test of the U.S. Army’s Shadow UAS, and our advanced research group has also been working on other products that leverage the Office of the Secretary of Defense’s (OSD’s) UCS open-architecture,” said Douglas Limbaugh, Kutta’s CEO.

Kutta’s AUVSI booth will display the UCS-BDRVT® as well as a STANAG Level 5 handheld Ground Control Station (GCS) and a lightweight MILSPEC computer – The KRC-100. When the UGCS-400 is coupled with the KRC-100, the result is a full MILSPEC, STANAG Level 5 GCS for small UASs, weighing less than 15 pounds including radio and battery. The UGCS-400 still contains all the features of the previous UGCS, including supervised usage mode, but it is now lighter, faster, and more efficient.

Leveraging the power of OSD’s UCS open-architecture, the UGCS-400 can be scaled from a handheld GCS to a larger mobile or fixed site system capable of controlling multiple unmanned vehicles. “To our knowledge, this is the smallest, lightest, and most feature-rich Level 5 GCS on the market that fully supports OSD’s open architecture model,” said David Barnhard, Kutta’s Director of Business Development.

Kutta’s products will be on display at the Association for Unmanned Vehicle Systems International (AUVSI) Trade Show in Washington, D.C. on August 12-15th 2013. Kutta can be reached in booth #2125 during daily exhibit hours of the show.