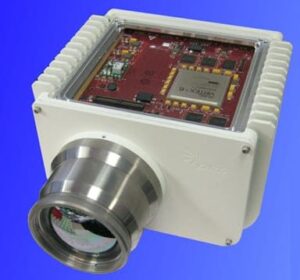 The military uses long-wave infrared (LWIR) cameras as thermal imagers to detect humans at night. These cameras are usually mounted on vehicles as they are too large to be carried by a single warfighter and are too expensive for individual deployment. However, DARPA researchers recently demonstrated a new five-micron pixel LWIR camera that could make this class of camera smaller and less expensive.

Performers at DRS Technologies, Inc., working on the DARPA Advanced Wide FOV Architectures for Image Reconstruction and Exploitation (AWARE) program, have demonstrated the first LWIR camera that uses pixels only five microns across. This is the first IR camera with pixels about half the size of the photons it detects. For comparison, each pixel is about one twelfth the size of a human hair, or about one-sixth the area of current state-of-the-art. The pixels are configured in a 1280×720 focal plane array (FPA)—a relatively high resolution for an IR camera.

The benefits of developing smaller pixels for LWIR cameras are similar to those in visual cameras, like what may be found on a cellphone. Smaller pixels mean smaller optical components and packaging without forfeiting sensitivity, resolution or field of view. A higher density of pixels over a given area makes it easier to capture the photons from, and thus image, a target. The cumulative result is a smaller, lighter and more portable LWIR camera.

These new LWIR cameras may also be less expensive than current sensors because the cost of FPAs is proportional to chip area. FPAs are processed on a given wafer size. The more FPAs that can be printed on a single wafer, the lower the cost per FPA. Smaller pixels will therefore reduce the size, weight, power and cost. DARPA hopes that with appropriate optical adjustments, the advantages of smaller pixel FPAs will find a home in a multitude of next generation applications.

“DRS built three fully functional prototypes as part of this DARPA work,” said Nibir Dhar, DARPA program manager. “The cameras have been tested for various applications, including peering through particles in the air, which would be useful for helicopters landing in brownout conditions. We have found that the image is crisp and the performance of these FPAs is comparable to those with much larger pixel sizes.”

DARPA recently announced other breakthroughs under the AWARE program, including a gigapixel-class camera and advances that may enable smaller thermal scopes.