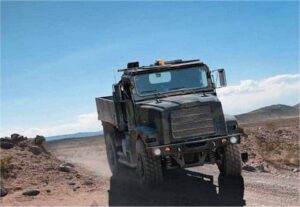 The TerraMax UGV technology provides a solution for two primary needs of today’s military customers worldwide. It helps reduce the threat to Warfighters from improvised explosive devices (IEDs) on today’s battlefields by increasing a driver’s situational awareness or removing a driver from the vehicle entirely. It also serves as a force multiplier by allowing one operator to supervise three to five UGVs from a safe distance. All this at a time when militaries are facing force reductions.

“Crew protection is a crucial priority for militaries as they modernize their vehicle fleets,” said Serge Buchakjian, senior vice president and general manager of International Programs for Oshkosh Defense. “Our TerraMax technology gives forces the option to complete missions in dangerous situations with fewer troops. Our UGV technology has been extensively tested and refined, using input from troops and leveraging our more than 90 years of experience mobilizing military forces worldwide.”

Designed as a scalable kit that can be used on any fielded tactical wheeled vehicle, the Oshkosh TerraMax UGV technology enables vehicles to complete planned missions in full autonomous mode or by “shadowing” a leader vehicle. Oshkosh will demonstrate at IDEX the TerraMax UGV technology’s Operator Control Unit (OCU), a user-friendly control interface that provides the usability and functionality capabilities that troops need for operations in the field.

The TerraMax UGV technology is highly sophisticated but was developed with the user in mind and for ease of control. Troops can be trained to operate vehicles remotely or in full autonomous mode in only a few days. Vehicles equipped with the TerraMax UGV technology retain their original payload and performance capabilities and can operate for extended periods of time – day or night, through dust and adverse weather – without enduring the fatigue that can afflict human operators.

Countries throughout the Middle East region, including the United Arab Emirates, the Kingdom of Saudi Arabia, Egypt, Jordan, Iraq and Oman, rely on Oshkosh vehicles for tactical and logistical operations. The company has been supporting militaries in the region for nearly 30 years and has a well-established presence with permanent offices in the United Arab Emirates and Kingdom of Saudi Arabia. Oshkosh retains partnerships with industries in select markets and provides the full spectrum of vehicle life-cycle sustainment capabilities through its Integrated Product Support services.

Oshkosh Defense leadership will be available at IDEX to discuss the company’s commitment to the Middle East and North Africa region, as well its full range of vehicles, technology and service offerings, at booth #03-C10.