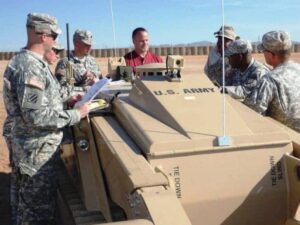 Tripping improvised explosive devices and unexploded ordnance in a controlled way to avoid Soldier injury has now become an automated process for Soldiers. Soldiers are now training on the M160 MV4 DOK-ING, a remote-controlled, tracked mine clearance system to trip hidden improvised explosive devices, or IEDs, unexploded ordnance, known as UXOs, and anti-personnel mines. By sending the system out to look for explosive dangers, Soldiers can clear a route without putting themselves in danger.

“Never send a man to do a machine’s job,” said Mark Decker, a technician trainer and instructor with the Robotics Systems Joint Project Office.

The M160 MV4 is the first of its kind here and is the latest addition to the Mobilization Training Center, the route clearance training program at Fort Bliss.

The M160 MV4 is currently used in Afghanistan by route clearance units.

“Having this equipment available to train our reserve-component forces during their premobilization training will allow these units to arrive in their forward-deployed theaters with a unique and critical skill set,” said Lt. Col. Aaron Dorf, Task Force Rampant commander.

“We are constantly striving to acquire combat systems that emulate what these joint warfighters will encounter downrange,” Meeks said. “The more training we can provide to them in this environment the better. It’s our job to prepare them for success, and having the right tools of the trade is key for this mission.”

The M160 MV4 employs a rotating shaft with chains attached to disturb the surface of the ground in an attempt to detonate or unearth deadly mines and unexploded ordnance. The flailing action is designed to establish a safe path of travel for dismounted troops in the area.

During the first day of the two-day training event, Soldiers received familiarization of the system’s internal and external components, and training on the fuel system. This was followed by instruction on preventive maintenance checks and services and the proper methods to inspect the track area, engine compartment and its attachments.

“PMCS training and testing of the equipment is as important as operating it,” said Master Sgt. Warner Stadler, the Task Force Rampant senior mechanic. “Without formal training on the care of equipment, it is very likely the equipment will not be available and ready when required.”

Once proficient at maneuver, the Soldiers were taught methods for employing the robot to reducing obstacles. The flailing block of instruction was conducted on a 3,100-meter test lane that was used to simulate entering an unclear area.

The key to effective flailing was the ability to employ the M160 MV4 using a variable tool speed, the correct downward pressure and gear. Prior to entering the unclear area, Soldiers must perform a soil test to check the effectiveness of the settings, and then adjust as necessary.

“The M160 is definitely an asset to any deploying unit,” said Staff Sgt. Daniel Denny, after two days of flailing. “I’m excited to be able to provide future training to engineer Soldiers.”

A practical exercise allowed Soldiers to get a better feel for the machine and its combat role. Each Soldier took turns holding the remote control to maneuver the M160 MV4 along the training lane.

“The remote-control-operated vehicle is actually fun to drive and maneuver, said Staff Sgt. Chamberlain Wolfe. “However, its mission is very serious and critical to our safe maneuver in what at times is a dangerous region.”