Sagetech Corporation an avionics company, and Arcturus UAV will demonstrate the use of the “NextGen” Automatic Dependent Surveillance-Broadcast (ADS-B) system to facilitate joint operations between unmanned and manned aircraft, by providing operators and pilots in-flight tracking of all participating aircraft. The event will be staged from McMillan Airfield in Camp Roberts, California, on October 24, 2012. 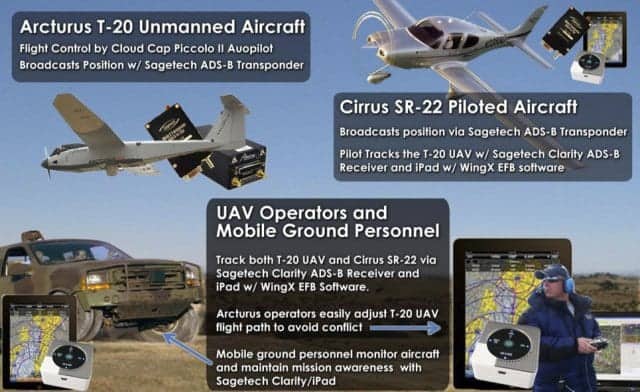 Aircraft will use Sagetech XP transponders to broadcast ADS-B position messages. These messages are received by Sagetech Clarity ADS-B receivers, which relay them via Wi-Fi link to an iPad for display with Hilton Software’s WingX app. The demonstration employs very low cost COTS equipment that has recently become readily available as a result of ADS-B system deployment coupled with a surge in popularity among general aviation pilots of inexpensive portable receivers that work with an iPad.

One goal of the demonstration is to show that joint manned/unmanned aircraft operations are feasible now, in circumstances where use of this equipment kit can be assured. Examples are aircraft firefighting operations within TFR (Temporary Flight Restriction) controlled airspace, and military range operations.