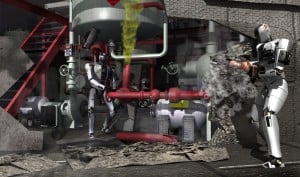 Artist's concept of robots competing in the DARPA Robotics Challenge

The DARPA Robotics Challenge (DRC) began yesterday and over the next two years, teams will compete to develop and put to the test hardware and software designed to enable robots to assist humans in emergency response when a disaster strikes. Based on proposals submitted in response to a Broad Agency Announcement, DARPA has selected and will provide funding for seven teams in Track A of the DRC to develop new robotic systems containing both hardware and software and 11 teams in Track B to develop software only.

Registration is just beginning for participation in Tracks C and D: http://www.theroboticschallenge.org/.

Track C of the Challenge provides an opportunity for individuals and teams from around the world to compete without the need for hardware. Anyone with the skills to develop the software needed to advance core robotic software capabilities can register and participate using the open-source DRC Simulator. Expertise in software for robotic perception, planning, control and human-robot interface, and experience in physics-based games, models and simulation, as well as open-source code, will all be useful. Participants also need to be motivated since the first DRC event, the Virtual Robotics Challenge, is scheduled to take place only eight months from now in June 2013, and a qualifying round is planned to be held in the Simulator in May. In both rounds, Track C teams would face off against Track B performers on an equal footing.

After only one month of development, the Simulator is currently available in beta version 1.0 and will be improved throughout the coming months for DARPA by the Open Source Robotics Foundation. Over time, it will be increasingly populated with models of robots, perception sensors and field environments, and function as a cloud-based, real-time, operator-interactive virtual test bed that uses physics-based models of inertia, actuation, contact and environment dynamics. With the cooperation of the National Institute of Standards and Technology, the Simulator will be rigorously validated, meaning users can confidently leverage it as a resource to test software.

“The DRC Simulator is going to be one of DARPA’s legacies to the robotics community,” said Gill Pratt, DARPA program manager for the DRC. “One of DARPA’s goals for the Challenge is to catalyze robotics development across all fields so that we as a community end up with more capable, more affordable robots that are easier to operate. The value of a cloud-based simulator is that it gives talent from any location a common space to train, design, test and collaborate on ideas without the need for expensive hardware and prototyping. That opens the door to innovation.”

Track C participants will not receive DARPA funding unless they qualify and are selected to advance beyond the Virtual Robotics Challenge, at which point they, along with select Track B teams, will also receive Government-Furnished Equipment (GFE) in the form of a modified robot platform based on the Atlas robot developed for DARPA by Boston Dynamics. Some of the capabilities of a predecessor to Atlas are shown below:

Track D is an option for teams from around the world that desire to develop both robotic hardware and software in pursuit of the common goal of effective disaster-response robots, but without DARPA funding. Like the performers in Track A, Track D participants are encouraged to develop robots of any form, not just humanoids. And while DARPA’s GFE robot will be hydraulic, Track D robots could be actuated electrically, pneumatically or with a hybrid method. Track D participants may use the Simulator at their discretion, but their focus will be on participating in the live challenge events in 2013 and 2014.

“We’re very excited for and supportive of international participation in the DRC,” Pratt said. “Just as natural and man-made disasters are common worldwide challenges, what the response to the DRC has shown is that the international robotics community shares a common goal of advancing robotic technology to the point where it can have a tangible and positive impact on humanitarian assistance and disaster relief. Through the DRC, DARPA is providing the forum, tools and incentives to come together and take steps toward that goal.”

The range of designs submitted by the selected Track A performers reflects DARPA’s emphasis that while the robots competing in the DRC must be able to operate in human-engineered environments, they do not have to be humanoid in form. The seven Track A teams are led by: Carnegie Mellon University’s National Robotics Engineering Center, Drexel University, Raytheon, SCHAFT Inc., Virginia Tech, NASA’s Johnson Space Center and NASA’s Jet Propulsion Laboratory. (Track A teams and robot designs)

For the full, anticipated schedule of events and additional details of the DRC, please see the information at: http://www.darpa.mil/