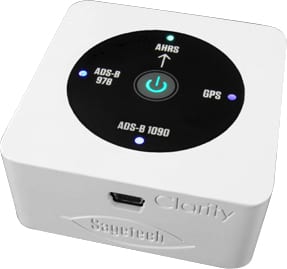 Unmanned avionics innovator, Sagetech Corporation, brings its expertise in miniaturization to the General Aviation market this summer with its new ADS-B receiver. The Clarity family of ADS-B receivers offers a remarkable array of features in a portable unit smaller than a hockey puck.

The Clarity Family of ADS-B Receiver Highlights include:

Sagetech is now accepting orders for Clarity ADS-B receivers, which will ship in July and debut at the EAA AirVenture, Booth #4036 in Oshkosh, Wisconsin.

Two paradigm shifts have taken place in aviation to give rise to the relevance of ADS-B receivers. The first is the roll out of the FAA’s new “NextGen” system of air traffic control, which employs ADS-B technology. The second is that the aviation community has experienced a fundamental shift as “electronic flight bag” applications running on tablet devices like iPad have displaced paper charts in the cockpit. Electronic chart updates are faster and much less expensive than the paper charts they replace, and pilots enjoy a tremendous increase in convenience and efficiency with the proliferation of electronic charts. Sagetech’s new Clarity ADS-B receiver integrates these technologies to increase safety and convenience by creating a connection between the new FAA “NextGen” ADS-B system and EFB iPad apps used by pilots in the cockpit.

“We feel like kids in a candy store,” says Sagetech President Kelvin Scribner. “General Aviation can really benefit from Sagetech’s expertise in miniaturizing RF equipment for unmanned aircraft, and we’re eager to provide the GA community with more sophisticated electronics than what’s currently available on the market.”

“Pilots are already banging at our door for Clarity,” Scribner notes. “And Clarity is just the beginning! We plan to offer additional innovative products by applying even more of our UAV technology. It will make the GA cockpit easier, more convenient and, as a result, much safer.”