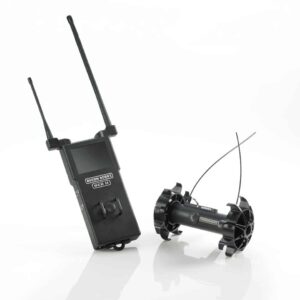 “Our objective with this product evolution was to dramatically increase the capabilities of our micro-robot without increasing its weight, and we accomplished that,” said Jean-Luc Panetta, Vice President of Product Management and Engineering. “We are very mindful of the soldier’s burden, and we believe that the new Throwbot XT is, pound-for-pound, the most versatile, robust, stealthy and easy-to-deploy robot system in the world.” The Throwbot XT is inherently water and dust resistant, weighs just 1.2lbs (540g), and can be thrown up to 120 feet (36m). It is also exceptionally quiet and is equipped with an infrared optical system that activates automatically when the ambient light is low, enabling the operator to see in complete darkness. Once deployed, the micro-robot can be directed by the operator to quietly move through a structure and transmit video and audio to the handheld Operator Control Unit II (OCU II).

These stealth capabilities can be utilized to locate armed subjects, confirm the presence of hostages or innocent civilians, listen in on conversations, and reveal the layout of rooms – information that can save lives and increase the success of high-risk operations. Up to three robots can operate in the same environment at the same time without interference.

In 2007, ReconRobotics introduced the Recon Scout robot and created an entirely new class of robots called tactical micro-robots. Unlike other military and law enforcement robots, which weighed 40 to 80lbs and were transported in a vehicle, Recon Scout robots were sublimely small and simple. Today, soldiers and SWAT personnel carry their Recon Scout robots in small packs or pockets and deploy them in under five seconds to gain lifesaving situational awareness and greater standoff distance. More than 3,700 of the company’s micro-robot systems are deployed by the U.S. military and allied friendly forces, and by nearly 500 police tactical teams and bomb squads, worldwide. Nearly 2,000 of these robots are currently deployed with U.S. Army and Marine Corps fire teams in Afghanistan for use in urban warfare and compound clearing operations. ReconRobotics has recently established its international headquarters in Lugano, Switzerland, signaling a significant advancement in the company’s three-year global expansion.