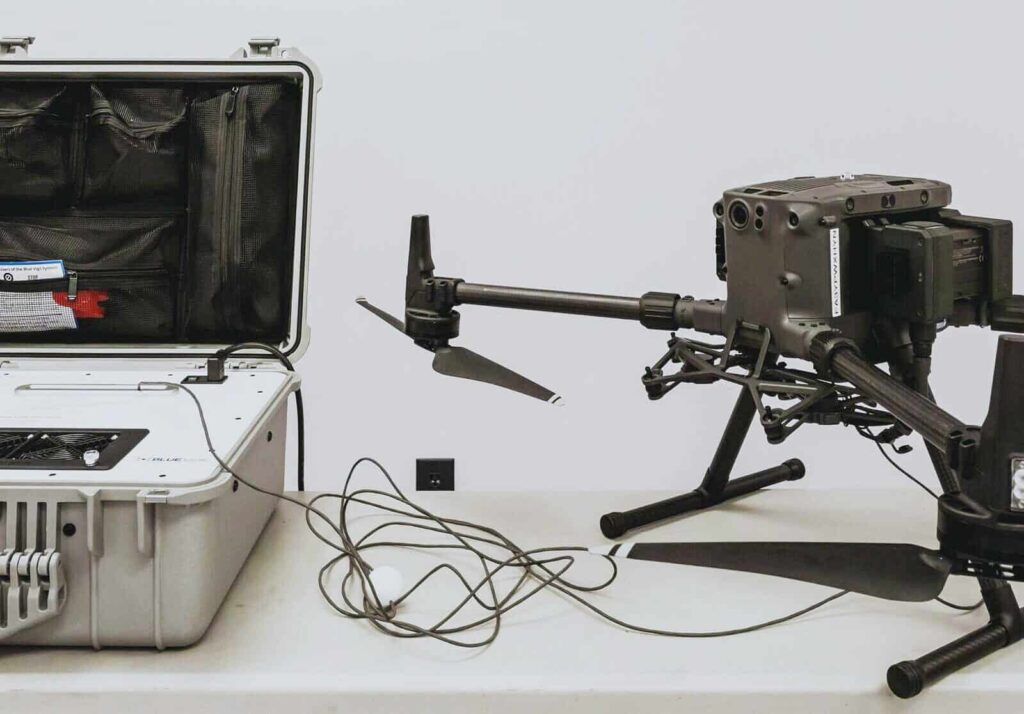 Blue Vigil has released the following article exploring how the use of tethered drones could revolutionize the future of traffic studies, providing a significant endurance benefit over free-flying UAVs.

Commercial drone usage has soared since 2016 with the adoption of the FAA’s Part 107 regulations, which define the rules for commercial drone operation. In just a few short years, enterprise drones have become central to regular business operations in companies across a variety of sectors. As drone technology evolves, more and more use cases are discovered. One such use is collecting data for traffic studies.

What Are Traffic Studies?

Traffic studies are usually conducted on the municipal, state, or federal level to investigate the transportation system in a specific area. They are often done to examine a recurring problem and determine a solution. They may also be used to project traffic growth and road usage due to proposed developments. Collecting data is a key element of a traffic study, and having accurate data is essential for successful traffic and transportation planning.

How is Traffic Data Collected?

There are many methods for collecting traffic data, including human surveyors doing manual counts, video recorders, sensors, pneumatic road tubes, and induction loops. Most of these methods are time-consuming, labor-intensive, and expensive, even with the use of analytical software tools. It’s not surprising that enterprise drones are being looked at as an efficient alternative to traditional traffic study methods.

One of the limitations of traditional data collection methods is that they are tied to specific intersections or locations. Even with the use of multiple cameras, there is a limit to their range beyond the area being recorded. The use of drones for data collection solves this problem. Drones can cover a larger area than traffic cameras on poles, which are limited to about 100 – 130 feet in distance. They can also be deployed in locations where there is no place to install cameras or where the poles aren’t high enough to get a good field of view. And drones also have better video quality making the recordings easier to view.

Still, the use of drones in data collection does have some challenges. The technology is relatively new so many engineering firms don’t yet employ drones for their studies. Drones also require a licensed pilot and an operator during flight. Weather conditions, such as strong winds, are also a factor and can cause a drone to drift off course. But the biggest limitation to using a drone for data collection is the short battery life. Drone batteries generally last for 15-20 minutes before needing to be replaced. For projects that require continuous video footage for an extended period, this can be a problem. But it’s one that can be overcome with the use of two drones during the collection period or with the use of a power tether.

Extreme Aerial, a leading drone photography and videography company, was hired by an engineering firm to collect data for a traffic study at a new light rail stop. The study was commissioned by a state agency because of the high number of pedestrian accidents at the intersections in front of the light rail platform. The goal of the study was to determine how to redesign entry and access to the rail stop to reduce the number of accidents.

Extreme Aerial was asked to record traffic at the intersections around the light rail stop to capture pedestrian counts, traffic counts, and other information such as how many people used the light rail station and how many people jaywalked. To get an accurate picture of both pedestrian and vehicular traffic in the area, Extreme Aerial needed to conduct its study over the course of 25 days. Each day, they used two enterprise drones to film 5 intersections continuously over an 8-hour period. One of their drones was connected to Blue Vigil’s RS1000 tether power system. [Learn more about Blue Vigil’s tether power system.]

Benefits of using a Tethered Drone

Mark Taylor, Chief Geek (and owner) of Extreme Aerial, says that flying a drone on Blue Vigil’s tether overcame most of the limitations associated with using drones for data collection – most notably, the problem of short battery life. Mark’s team was able to fly the tethered drone for 2.5 hours before landing. And even then, the need to land was because the SD card was full. Conversely, the drone not on a tether needed to have its battery replaced every 20 minutes. That’s 24 times over the 8-hour period. An additional benefit of using a power tether is that the drone can hold its position without constant operator input.

The use of drones for traffic data collection is still relatively new. But, early adopters like Extreme Aerial are showing us their potential for revolutionizing how traffic studies are conducted. As drone technology evolves, we expect the use of drones for data collection and traffic monitoring will gain greater momentum. Power tethers make drone use even more practical for these scenarios by eliminating the need to recharge and swap batteries. Blue Vigil is excited to be a part of that journey.