LightWare has released the following article detailing how True Autonomy selected its SF40/C 360 degree scanning LiDAR to automate its ACP-100 concrete polisher, enabling it to self-navigate and safely operate within predictable and predefined parameters of a floor polishing job. 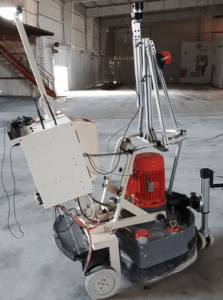 We evaluated a variety of sensors. We did a study on sonar sensors and why they don’t work very well. We also did a study on LiDAR and on depth cameras. But you guys came up on top meeting all the requirements that we had.

True Autonomy is a robotics engineering company that specializes in the production of autonomous navigation systems for small construction equipment. True Autonomy’s goal is to improve the overall quality and efficacy of floor construction from “pour to polish”.

The ACP-100, a robot designed by True Autonomy, is a retrofittable autonomous robot able to navigate and operate a concrete polishing machine. The ACP-100 empowers contractors to do the more difficult hand grinding, caulking and cleaning activities in parallel with polishing. Reports from the ACP-100 system let project managers know when, where and how much was polished for each flooring job. With the ACP-100 concrete polishing has never been more efficient, more effective or more affordable. Gone are the days of missed square footage or inconsistent polishes!

Why target concrete floor polishing machines?
True Autonomy focuses on developed initial systems in well-defined spaces with a clear business case.  Concrete polishing occurs after most of a building has been built but prior to racks, freezers and, most importantly, customers filling up the space.  The tools currently required for successful concrete polishing are labor intensive, expensive, and highly regulated.  Bringing autonomy to concrete polishing solves many of the most pressing issues for contractors in that market.  Removing a human from physical control of the dangerous task also improves workplace safety and improves worker welfare.

The machines, instead of being just $10 000 or less are usually $20 000 to $30 000, meaning the same margin goes a longer way for an improved product. At a minimum. They usually operate in dusty environments that are regulated by OSHA (Occupational Safety and Health Administration) and other governing bodies on construction sites to make sure that workers aren’t hurt. So, concrete polishers are not massively dangerous, but they’re more dangerous than cleaning a floor. Automating concrete floor polishing means that you consistently cover every square inch of floor and you know definitively how many times an area was covered. It also means that the job gets done as efficiently as possible.

It’s important to note that robots replace tasks, not jobs. By removing a physically intense and repetitive task, robots enable humans to do higher value work or complete a job sooner. More jobs, done faster, means more money for the contractor and lower costs (and fewer delays) for the customer all while improving job site safety.

Modern concrete floor polishing is a tedious task, that involves large square footage of often freshly poured concrete which, must be diligently scratched with progressively finer diamonds in a methodical path. This is a very repetitive and demanding task. It’s high intensity and physically demanding and as a result leads to human fatigue and progressively slower operation as a day or project continues. Robotic automation does away with these concerns. Machines do not tire, are highly programmable and follow strict programming requirements. Consistency in operation and speed are guaranteed.

As concrete floor polishing is a very repetitive and demanding task that happens in a well-defined environment (i.e., within the clear confines of a warehouse floor) –  it is an ideal operation for robotic automation.

By automating the ACP-100 concrete polisher, by integrating it with a 360 degree scanning LiDAR, the SF40/C, the ACP-100 is able to self-navigate and safely operate within a predictable and predefined parameters of a floor polishing job. In so doing the ACP-100 empowers contractors to do the more difficult hand grinding, caulking and cleaning activities required in a flooring job- in parallel with polishing done by an autonomous machine. And it gets even better – the system is able to send reports to let project managers know when, where and how much flooring was polished in each job. Gone are the days of missed square footage or inconsistent polishes!

What is the complete set up?
True Autonomy started out with a custom controller and their own PCB that they printed. But ultimately, they decided that it made a lot more sense to just use a USB connector and connect it to an Intel unit for computing. This then is the processor core of the system. They also have a hard drive and everything else – basically a miniature computer. This gives them a lot of “horsepower” to run their algorithms. But it also gives them runway for when they want to grow the system in the future. It allows for the future addition of processing capability and additional storage. So, their final set up or “version two” connects the NOC via USB and then powers it directly off an AC/DC converter they use for power management. They also have a control panel, a LightWare custom developed interface, with a cable coupling that they just plug into their system.

Currently the biggest challenge facing True Autonomy is as regards connecting with the market as this is a new industry and a new application for robotics. So, they have designed their product to run with any autonomous/robotics system that exists out there.

True Autonomy try to work with businesses to find ways to change the way work gets done. As a result there is a need for more education around how automation can change work processes. The True Autonomy approach is not to try to completely reinvent the wheel, rather they have created a little box that you could attach to the existing machines – and still have the same form factor – that should the client want to, they can still gracefully degrade into a man pushed device, if for some reason the machine failed to perform. They believe that these kinds of design considerations are critical for early adoption of new kinds of technologies – because if you have this giant robot that for whatever reason isn’t working, it then becomes a giant paperweight if you can’t use it through some other means.

The other challenge facing True Autonomy is in building credibility and in letting people know about their offering. They need opportunities for an end user to see and thus believe that it actually works. And that’s hard to do. It’s especially hard to do in the time of COVID because of restrictions around getting out there and in demonstrating in front of people, after all seeing is believing. True Autonomy hopes to overcome this challenge by growing a base of “early adopters” – a kind of “super user” who are willing to deal with a few minor headaches but in the interests of giving the technology a chance they persevere. It is their experience that this type of customer often becomes a kind of  product “evangelists” and promote the product themselves in their own work communities and amongst their peers. This also provides True Autonomy with credibility, as users who promote the product can speak to its performance and the time and money saved.