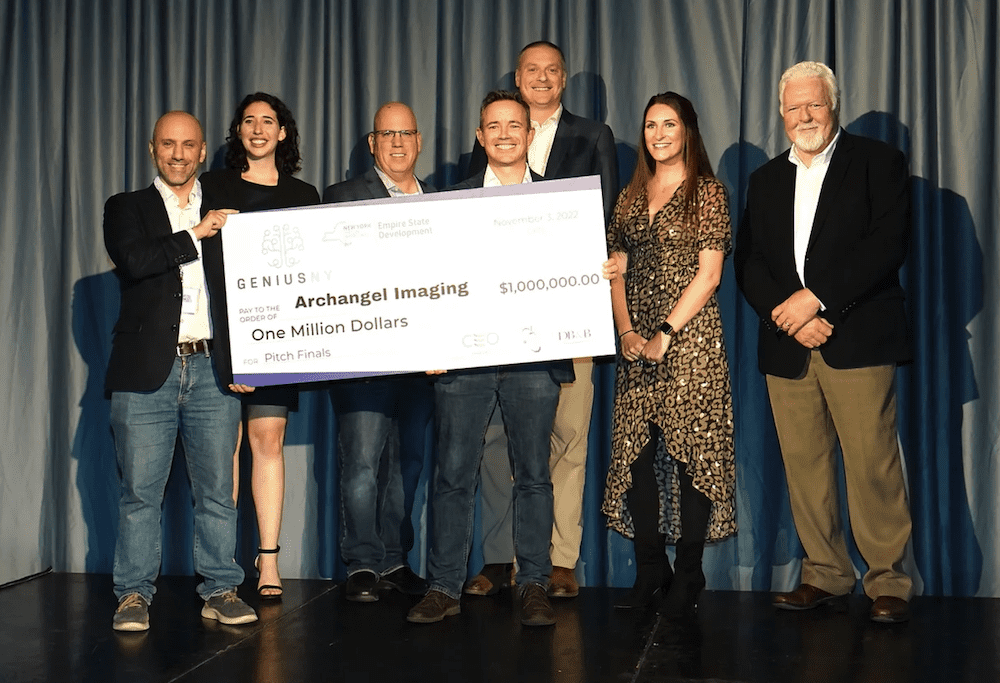 UK-based Archangel Imaging has been announced as the winner of the $1 million grand prize from round six of the GENIUS NY accelerator.

Archangel Imaging deploys smart machines, alongside people, to protect valuable assets and at-risk staff in remote or challenging places. The company provides the ability for the security team to know before these incidents are about to happen and immediately intervene or follow up.

The GENIUS NY program is the world’s largest business accelerator competition focused on unmanned systems, data to decision and IoT. The year-long program awarded five finalist teams a total of $3 million at its Finals Night event in downtown Syracuse, including investments of $1 million and four $500,000 awards.

The program, which is administered by CenterState CEO’s Tech Garden in Syracuse, offers incubator space, company resources, programming and mentoring to accelerator finalists. To date, New York State has invested $30 million in GENIUS NY over the programs six rounds. Participants are required to operate their business in Central New York for at least one year.

“As we continue to support innovation and key industries throughout New York, key investments are being made to revitalize Central New York,” said Governor Kathy Hochul, who announced Archangel Imaging as the $1 million grand prize winner. “The GENIUS NY competition continues to transform the landscape of Central New York by attracting the next generation of innovative entrepreneurs from around the world to the region. Our continued investment in uncrewed aerial system businesses is helping to ensure that New York State remains at the forefront of this important industry, bringing quality jobs and economic growth to the region.”

During the live event, the five teams pitched their business plans to a panel of judges and audience. Following the pitches, all five competitors were awarded one of five investments. The teams will use these investments to continue to accelerate their growth and expand their presence in the region.

“Being selected as the GENIUS NY 2022 Grand Prize winner is an incredible achievement and recognition for our team, particularly in the context of such high-quality companies in the cohort this year,” said Dan Sola, CEO of Archangel Imaging. “This investment enables us to create high value jobs and fuel long term growth and local partnerships. Throughout the program we have benefited from the amazing support and investment from GENIUS NY, CenterState CEO and Empire State Development. Both local government and local businesses here have helped us to hit the ground running and we’re already hiring and engaging in joint development. We are proud to be a part of the Central New York community.”

Since 2017, GENIUS NY companies have raised more than $90 million in follow-on funding and have created 75 jobs in the region. The advancement of the GENIUS NY program builds on the progress of CNY Rising, the region’s award-winning strategic plan to revitalize communities and grow the economy.

Empire State Development President, CEO and Commissioner, Hope Knight, said, “The GENIUS NY program is supporting the incredible growth of the uncrewed aerial systems industry in Central New York. Congratulations to all of these forward-thinking innovators who are bringing their exceptional entrepreneurial ideas to the region and are ready to take advantage of New York State’s unmatched UAS assets and infrastructure.”

CenterState CEO President Rob Simpson said, “The GENIUS NY programs represents our region’s commitment to advancing new and next stage innovations in the uncrewed, smart systems and IoT sectors. The investments these high-potential teams receive now will enable them to accelerate their growth and participate in the exciting progress that is driving our community forward. These international teams will continue in this program with the tools and resources they need to leverage these investments, advance their technologies and platforms, create jobs and contribute to the growing ecosystem we have established in Central New York.”

GENIUS NY at CenterState CEO director Kara Jones said, “The pitch finals event is an exciting opportunity for our community to see firsthand the incredible teams that have come here from around the world to grow their companies. The investments the teams receive during this event will enable them to go to market, build stronger partnerships with GENIUS NY teams from prior rounds, and focus on technology and business development, hiring and establishing headquarters and offices in Central New York. As they move into the program’s second round they will receive targeted support from mentors and advisors and will have additional opportunities to meet with investors to ensure their success.”

In addition to the GENIUS NY accelerator competition, New York State has focused on making major investments in the uncrewed aircraft systems industry. Since 2016, New York has committed to investing $56 million to develop and maintain a state-of-the-art, 50-mile drone test corridor that runs from Syracuse International Airport to Griffiss International Airport in Rome. Additional industry investments have included $9 million for Skydome, Oneida County’s indoor drone testing facility at the UAS test site, and $16.6 million in ongoing investments for the Tech Garden’s expansion in downtown Syracuse to further grow its UAS industry efforts in the region.

State Senator Rachel May said, “It is always exciting to see the expansion of new opportunities for Central New York’s flourishing UAS industry. Programs like GENIUS NY enable our area to attract and retain top talent in the industry and continue the growth we’ve seen over the past several years. This benefits CNY’s Drone Corridor and contributes to the entire region’s economic engine. Congratulations to the winners of GENIUS NY, and I look forward to seeing the innovation you bring to our community.”

State Senator John W. Mannion said, “Through state investments like Green Chips and the Genius NY program – Central New York is now home to vibrant and growing next-generation industries including drones, wireless communications, and coming soon: computer chip manufacturing. This ecosystem of innovation that includes Micron, JMA, MACNY, established drone companies and Genius NY start-ups, union labor, and our colleges and universities will be a magnet for further investment, jobs, and economic activity. I look forward to a continued partnership with Governor Hochul to keep the momentum going in Central New York.”

Assemblymember William B. Magnarelli said, “By drawing these companies to the Tech Garden through the GENIUS NY competition, Onondaga County continues to establish itself as a world leader in the drone and technology industry. The partnerships and opportunities created locally during the entrepreneurial stage create a catalyst for growth and industry leadership in the world-wide cutting-edge industry.”

Assemblymember Pamela Hunter said, “The GENIUS NY program continues to incentivize innovation and new investment in Central NY. CNY is poised to become a global hub for UAS technology development and I look forward to working with Governor Hochul on this continued investment. These programs greatly contribute to our revitalization efforts and will bring many new opportunities to our communities.”

Assemblymember Al Stirpe said, “Congratulations to the Round 6 winners, entrepreneurs that keep our region headed towards a responsible future and firmly on the international stage. From the unparalleled growth in uncrewed aerial systems (UAS) and robotics to making Reforestation scalable to mitigate the worst effects of climate change; the GENIUS NY program continues to invest in the people, industry, and economic growth of Central New York, making us all winners!”

Onondaga County Executive Ryan McMahon said,”It is incredibly exciting to see the emerging UAS industry continue to grow right here in downtown Syracuse. On behalf of Onondaga County, I congratulate and welcome these innovative companies who are ready to put down roots in Central New York. I have no doubt that they will continue to play an important role in our regions’ overall economic success.”

Oneida County Executive Anthony J. Picente Jr. said, “The GENIUS NY program is a perfect example of how Oneida County and CenterState CEO’s strong partnership is solidifying Central New York and the Mohawk Valley as the epicenter of Unmanned Aircraft Systems in the nation. I am excited to see where the winners will take our region’s UAS industry.”

Syracuse Mayor Ben Walsh said, “GENIUS NY is part of a thriving technology ecosystem in Syracuse and Central New York. The program has helped put our region on the map around the world as a key center for uncrewed aerial system development. More important for the city and our Syracuse Surge strategy for inclusive growth in the New Economy, GENIUS NY is creating good jobs and investment. I congratulate the latest round of winners and thank Governor Hochul and the teams at Empire State Development and CenterState CEO for their commitment to keep GENIUS NY soaring.”

Central New York Regional Economic Development Council Co-Chairs Randy Wolken, President & CEO of the Manufacturers Association of Central New York and Le Moyne College President Linda M. LeMura said, “Many Congratulations to all of the GENIUS NY round six winners. We are incredibly proud to welcome these imaginative entrepreneurs to the Central New York as they commit to growing their innovative business in this region. Through the regional council’s continued support for the GENIUS NY competition, we are ensuring that New York state remains at the forefront of the growing UAS industry in Central New York, creating new opportunities and jobs for residents in the region for generations to come.”