An R&D project by Thales to adapt unmanned aerial systems (UAS) for an underground surveying role is underway, with potentially life-saving implications as well as use within national infrastructure security, safety and search and rescue.

Prometheus is an autonomous, reconfigurable UAS capable of subterranean exploration. It carries advanced sensors and on-board processing power to navigate and to produce 3D maps which allow a void’s risk to surface infrastructure to be assessed.

Thales’s Optronics business is sharing sensor and electronic design expertise with partners from industry and academia on Prometheus, a miniaturised drone which combines autonomous technology with Lidar sensors to explore caves, abandoned mines and sewer systems, penetrating spaces which are ‘Beyond Visual Line of Sight’ of current surveying techniques and GPS-denied. 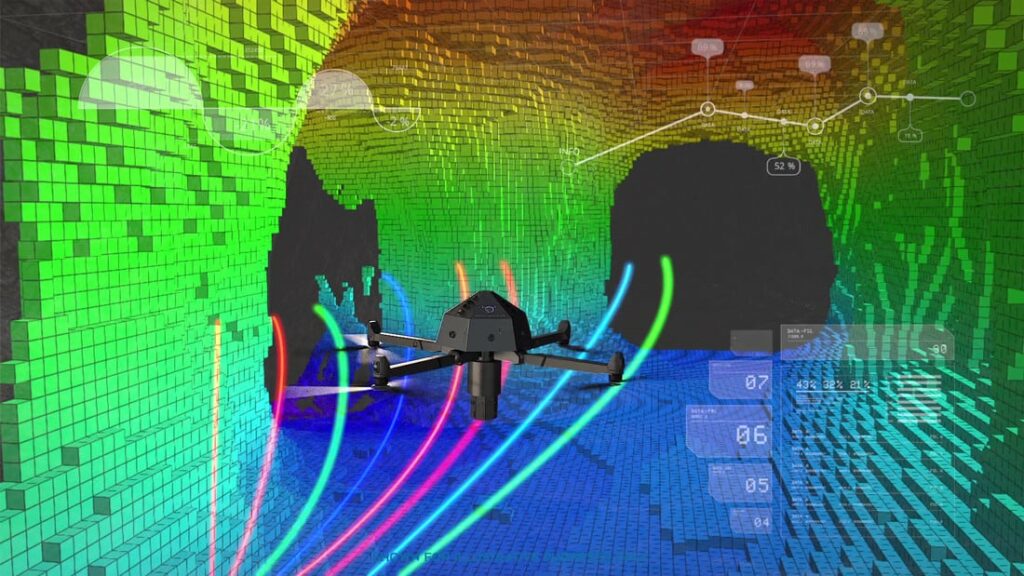 UAS are already employed on a variety of inspection and surveying tasks, but Prometheus is the first subterranean application of its kind.

Project consortium member Network Rail is responsible for checking the safety of thousands of miles of UK railway infrastructure, much of which is near underground voids, such as old mineworks, which have become unstable. These are normally surveyed by drilling a series of bore holes, which is an expensive and time-consuming method that leaves much of a space impossible to survey. Prometheus offers a quicker, cheaper solution which keeps personnel safely above-ground.

At 150mm diameter and correspondingly lightweight to maximise range and battery life, Prometheus can reconfigure its wings, allowing it to be inserted via a borehole through the roof of a void. It then deploys its rotors to launch from a docking port. On completion of its mission, the drone returns to its docking port for recovery.

Dr Tracey Skivington, Electro-Optics Consultant at Thales in the UK said of the project; “What is really exciting is the fact that Prometheus can operate in a GPS-denied environment and beyond visual line of sight. It could have important applications for our market in security.”

The development of Dragonfly sensor is being led by Headlight AI; the system uses an array of sensors that captures IR imaging and point cloud data in a single snapshot. Custom SLAM SDK and software APIs allows the drone to avoid obstacles and navigate in GPS denied environments.

Advanced algorithms enable Prometheus to perform reasoning to choose where to fly and trigger an autonomous navigation planner to plot a collision-free path towards a chosen node and to return to its docking station.

Designed for the toughest environments

Working in a subterranean environment is dangerous for humans and challenging for a UAS to operate in. Abandoned mines often flood, leaving large pools and water running or seeping from ceilings. The system may not be able to land or navigate on the floor and the presence of water can disturb sensors and delicate electronics. Mine atmospheres are also often dust-laden and potentially explosive.

The UAS must also negotiate numerous obstacles from stalactites to abandoned mining equipment and dynamic obstacles such as free-hanging cabling and tree roots. Prometheus is a robust system, with a water-resistant casing suitable for an ATEX environment and achieving an Ingress Protection rating of IP62.

Project Prometheus has been designed, built and tested by a consortium, led by SME Headlight AI and including potential end-user Network Rail. Other partners are airborne robotic systems developer Callen-Lenz and the Universities Manchester, Royal Holloway and Bristol, as well as Thales, bringing expertise in AI, integrating sensors and manufacturing techniques to this revolutionary platform.

The two-year, £2.2 million project is being funded through the Industrial Strategy Challenge Fund (delivered by UK Research and Innovation) under the Robotics and AI in Extreme Environments challenge.

Still being tested, Prometheus offers a wide range of commercial applications, inspecting underground infrastructure across the rail, utility, construction, and mining industries as well as search and rescue.