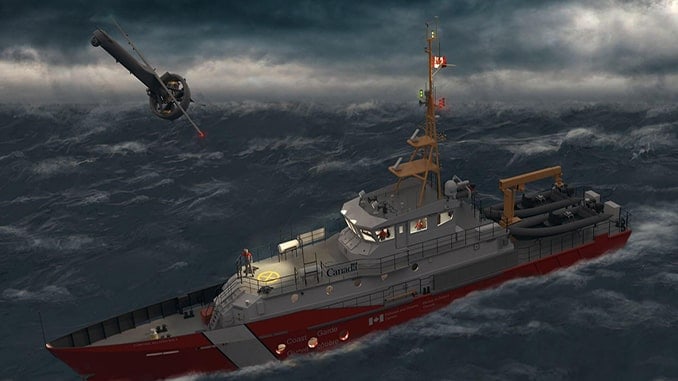 The V-BAT is a fixed-wing vertical take-off and landing (VTOL) UAV specifically designed to operate within a very small footprint in restricted environments such as the deck of a ship. The long-endurance aircraft is capable of carrying multiple sensors, including land and maritime wide area surveillance.

MIDAS will allow a range of sensor data, including full-motion video from the aircraft, to be processed and exploited in near real-time by analysts on board the Canadian Coast Guard ships. It provides the capability to compare historical and live data from the mission area, and to examine sensor data with a variety of tools, including motion and object detection. This near real-time analytical capability can greatly enhance the effectiveness of UAVs for a variety of mission types.

MIDAS is derived from technologies created for the NATO Alliance Ground Surveillance project, which required the storage and retrieval of vast amounts of intelligence data for intelligence analysts. The system directly addresses the issue whereby many UAVs have no standards-compliant capability to process, exploit, and distribute (PED) their sensor data to where it is being used. MIDAS provides a fully standards-compliant system packaged into a tactical and portable form factor for ships and temporary command posts.

The combination of the Martin UAV V-BAT and the Kongsberg MIDAS sensor data management system will allow Coast Guard vessels to significantly expand their surveillance range for search and rescue missions, and for the monitoring of the movement of icebergs, without requiring the use of manned aircraft.

Ranald McGillis, President of Kongsberg Geospatial, commented: “UAVs are a useful tool, but they are only truly effective if they can collect sensor data that results in actionable intelligence. Our MIDAS system allows users to fully exploit raw sensor data, and derive useful intelligence at the tactical edge where the UAV is being used. In a search and rescue context, that could mean using infrared sensors, or near real-time motion detection to locate a subject when visibility or weather conditions are poor.”