Common Operating Picture or Recognized Picture is a military asset that neds to be established and maintained on the ground, at sea and in the air, in order to observe the current status of both friendly and enemy units and to effectively evaluate threats and increase planning accuracy before operations.

How does SAR/MTI Radar contribute to Common Operating Picture?

Operators try to identify military units on the battlefield through the usage of various types of sensors. Identification Friend or Foe (IFF) and Automatic Identification System (AIS) sensors support the identification process for cooperative targets, and EO/IR cameras, Electronic Support Measures (ESM) systems, and radar systems are used in the process of identifying non-cooperative targets. SAR/MTI radars can significantly increase identification performance for both stationary and moving targets through evaluation of radar imagery and moving target indicators.

EO/IR sensors are the major identification tool for surveillance platforms, and many UAVs are limited to only these sensors, thus limiting the platform’s search capability due to the limited field of view. MTI radar can provide round-the-clock situational awareness by shortening and enhancing the target detection process. If the detection and tracking process is implemented only with EO/IR sensors, this process can be degraded due to high-speed targets, cloud cover, and low visibility situations. These detection and tracking difficulties can be overcome by using both EO/IR sensors and SAR/MTI radar. Theoretically, this combination provides a robust solution for the detection and tracking of both moving and stationary targets. This approach comes with some practical limitations, including the UAV’s payload capacity and budgetary issues. Low SWaP (Size, Weight, and Power), single LRU and low-cost SAR/MTI radars could turn an air vehicle such as a limited-capacity tactical UAV into a highly capable ISR (Intelligence, Surveillance, and Reconnaissance) platform.

As depicted in Figure 1, an EO/IR-capable UAV has a limited search capability. In contrast, an MTI-capable UAV has a 360-degree search capability, including Ground Moving Target Indication (GMTI) and Maritime Moving Target Indication (MMTI). If these two types of UAVs are jointly operated, a successful detection-tracking-identification process could be implemented even with low-cost tactical UAVs. The MTI-capable UAV detects moving targets on the surface, and then then Ground Control Station (GCS) can automatically direct the EO/IR-capable UAV to the detection location for identification. Another alternative is for a UAV to have both an onboard EO/IR sensor and MTI radar, which should be selected in accordance with the tactical UAV’s payload capacity. The MTI to EO/IR cueing mechanism is triggered by the sensor operator on the GCS.

Unlike MTI, SAR can provide information on stationary targets for intelligence personnel regardless of weather conditions. Image resolution of EO/IR sensors decreases with increasing range, but SAR radar imagery has a constant resolution that is independent of range. Submetric resolution for an area of interest tens of kilometers away from the surveillance platform provides the ability to gather imagery intelligence at stand-off range under all weather conditions, as seen in Figure 2.

METEKSAN’s MILSAR SAR/MTI Radar  can be operated on UAVs, helicopters and fixed-wing aircraft thanks to its easy installation feature. This high resolution radar system has the same form-fit mechanical interfaces as standard 15” EO/IR sensor. Operating MILSAR together with an EO/IR sensor in a “slew-to-cue” fashion improves the effectiveness of UAV-UCAV (unmanned combat aerial vehicle) joint operations, by maximizing the wide area surveillance of the UAV and increasing the UCAV’s attack capability. 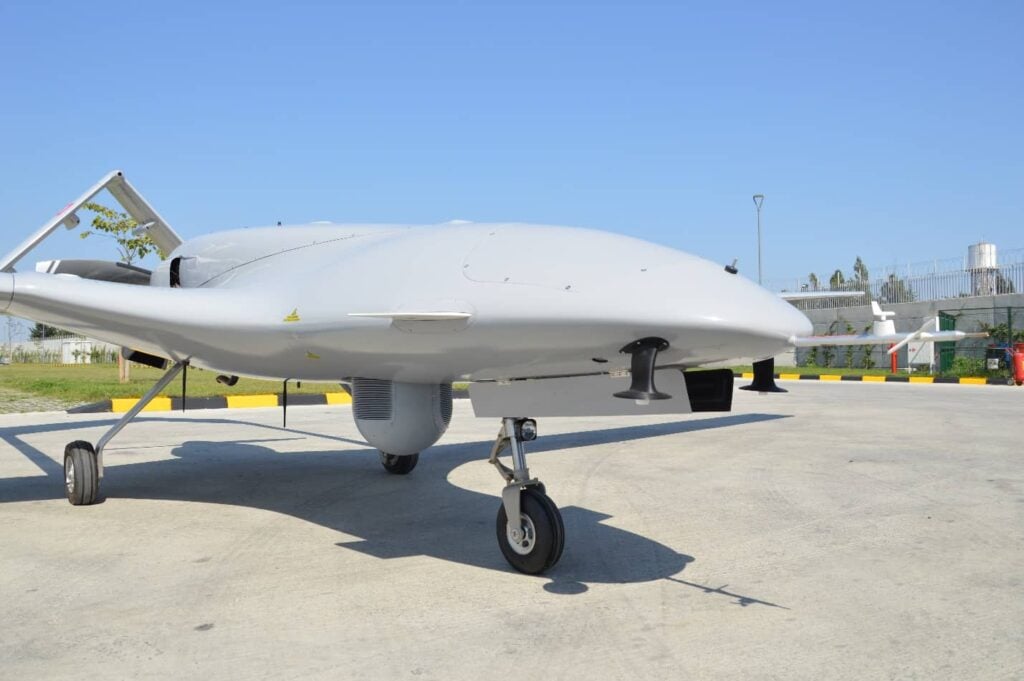