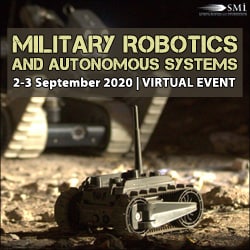 SMi Group’s Military Robotics and Autonomous Systems Conference will take place 2-3 September 2020 as a fully interactive virtual meeting. With over 140 delegates from 12 different nations, the event is a key calendar date for senior RAS decision-makers, operators and experts worldwide.

SMi Group have confirmed that the Virtual Conference Platform will provide delegates and sponsors with the following:

SMi Group have finalised the agenda and have released a preliminary attendee list. A snapshot of confirmed delegates include:

All attendance by military and government will be free of charge and other delegates can join for only £499. Register here >