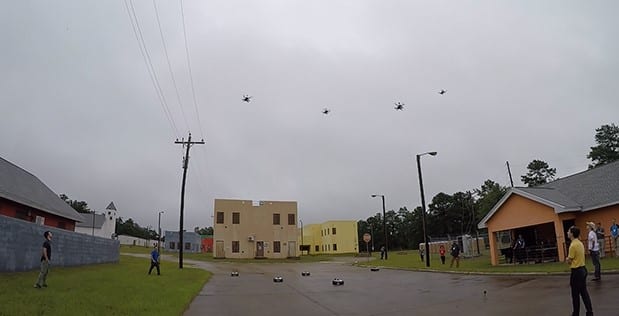 DARPA has announced that it has undertaken a second field experiment for its OFFensive Swarm-Enabled Tactics (OFFSET) program, during which teams of autonomous air and ground robots tested tactics on a mission to isolate an urban objective. Similar to the way a firefighting crew establishes a boundary around a burning building, they first identified locations of interest and then created a perimeter around the focal point.

For the experiment, which took place at the Selby Combined Arms Collective Training Facility in Fort Benning, Georgia, teams undertook a complex scenario spanning two city blocks. Tasks included locating and isolating a mock city hall building, locating and securing an objective inside, and then securing the building – all while maintaining situational awareness of the surrounding area. Runs lasted up to 30 minutes each.

The latest event brought together the integrators and second set of Swarm Sprinters, including Heron; Michigan Tech Research Institute; University of North Carolina, Charlotte; and Cornell University, to integrate and test swarm autonomy tactics and technologies.

“The pace of our scheduled experiments requires our performers to take risks” said Timothy Chung, the OFFSET program manager in DARPA’s Tactical Technology Office. “Rapid integration demands that our swarm teams, both integrators and sprinters, develop smarter ways to improve their current processes.”

The experiment at Fort Benning highlighted the benefits of continuous agile development and integration and deployment, the principle at the heart of the OFFSET program. The Swarm System Integrators showed maturation in field operations while the Swarm Sprinters contributed technologies to enhance system performance. The platform experimentation provided insights into the role of commercial-off-the-shelf technologies in a research and development program.

DARPA has awarded contracts for the next Swarm Sprint to develop novel approaches to Human-Swarm Teaming over the next six months to demonstrate in the next OFFSET field experiment. The awardees are Case Western Reserve University, Charles River Analytics and Northwestern University. Each of the planned five core “sprints” focuses on one of the key thrust areas: Swarm Tactics, Swarm Autonomy, Human-Swarm Teaming, Virtual Environment, and Physical Testbed. Each Swarm Sprint topic emphasizes different perspectives to ultimately enable breakthroughs in swarm capabilities.