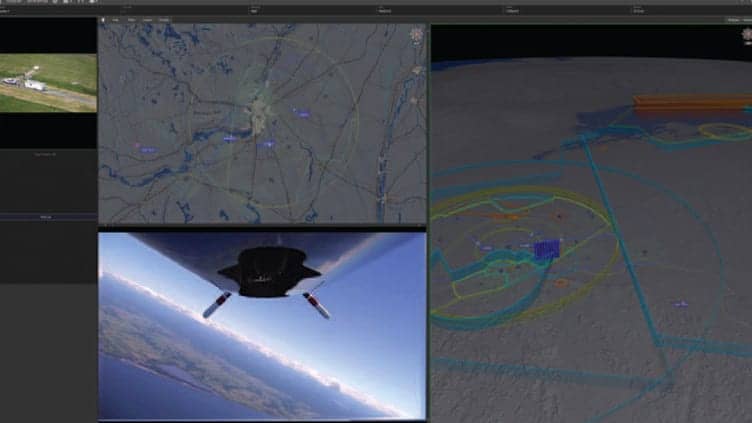 Kongsberg Geospatial has announced today that the company is introducing a new multi-domain control system for coordinating the use of drones and robotic systems in the battlespace.

Over the past four years, the company has developed an airspace awareness system for operating unmanned aerial systems (UAS) beyond visual line-of-sight (BVLOS), called IRIS UxS. While it is primarily a civilian product, the IRIS system was developed based on Kongsberg Geospatial’s corporate experience developing civilian and military air traffic control systems, including the US Navy air traffic control system and embedded trainer used on aircraft carriers, and military command and control systems, including the US Navy AEGIS system.

The IRIS system was first developed to help commercial drone operators safely operate beyond visual line-of-sight. The system integrated real-time data from a variety of sensors and other sources to create a very accurate picture of the airspace around a drone. This presented users with an integrated display with a 3D map showing exactly where their drone is, and all of the terrain, navigation hazards and other aircraft and drones in the vicinity.

Since then, IRIS has been developed into a full-fledged multi-platform control system integrated with a variety of autopilot systems, allowing a single operator to actively control multiple drones from a single station.

Now, Kongsberg Geospatial has announced a new, military-focused version of the IRIS system based on its participation in the NATO STANAG 4817 standard for multi-domain control stations. The new system collects and fuses data from a wide range of sensors: allowing operators to control multiple autonomous vehicles in a truly multi-domain mission theatre.

“Multi-domain C2 systems present a variety of unique technical challenges”, explained Paige Cutland, IRIS program director at Kongsberg Geospatial. “With the development of IRIS UxS, we’ve addressed many of these challenges in the airspace. Then we worked out how to coordinate with real-time tracking of ground-based assets. Now we’ve added the capability to work simultaneously in the maritime domain as well, allowing a single operator to control drones in the air, on the water, and underwater at the same time.”

The company hopes that their work relating to coordinating unmanned platforms with larger manned vehicles can help evolve new ways of visualizing multi-domain mission spaces for other command and control purposes.

“We’ve successfully proven we can coordinate manned, unmanned, aerial, and ground assets in the civilian emergency mission space,” said Ranald McGillis, president of Kongsberg Geospatial. “Now we’ve implemented the STANAG standard in a way that can make it easy to integrate unmanned systems in the military mission space.”