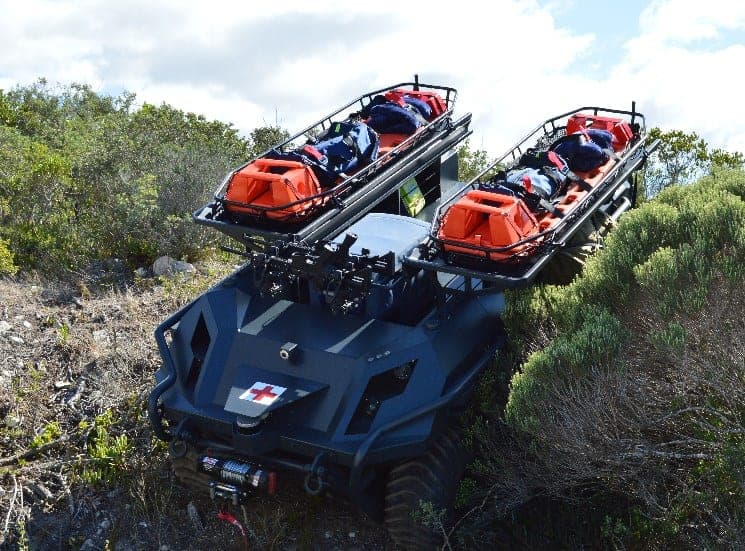 Rheinmetall has announced the launch of the Rescue and Surveillance variants of its Mission Master modular unmanned ground vehicle (UGV), which facilitates recovery of injured troops without compromising the operators’ safety, along with many other dangerous, dirty, and dull (DDD) tasks.

In the field, the right equipment can be the difference between life and death for wounded soldiers, since 90% of fatalities occur between the time of trauma and arrival at the combat zone medical facility.

Rheinmetall’s Rescue UGV has all the equipment necessary for a successful evacuation, including two basket stretchers with sliding provisions, head and foot immobilizers, oxygen masks and canisters, a monitor defibrillator, and a hot/cold box. All of these items would be impossible for a medic to carry on foot, but the Mission Master can handle the load with ease.

Operators can command the Mission Master from near or far using autonomous navigation, reducing the number of personnel needed on the ground. This feature leaves medics free to focus all of their attention on the injured soldier, as opposed to wasting precious time driving back to the extraction point. While transporting a wounded soldier using the UGV’s stretcher, for example, accompanying medics can use the vehicle as a workstation to administer emergency care.

Using the “follow me” function, the UGV can roll alongside other soldiers, who are busy making sure that the surrounding area is safe and secure. In both “follow me” and autonomous navigation modes, the Mission Master significantly relieves cognitive and physical stress, allowing troops to deal with the mission at hand.

As an autonomous vehicle, the Mission Master – Surveillance can minimize the number of troops needed on the ground, while providing timely situational awareness for enhanced security and informed decision-making. Multiple sensors relay real-time data to the integrated Rheinmetall Command and Control Software (RC2S) and Argus soldier system, enabling rapid threat detection during operation in the field.

The UGV can transport much more specialized, high-performance equipment than soldiers can typically carry on their person. As a result, not only does the Mission Master help to significantly reduce the physical load carried by dismounted soldiers, it also enhances the likelihood of mission success.

Each version of the Mission Master is networked to both the Argus soldier system and RC2S, the Group’s command and control software. The rugged, ultra-portable Argus soldier system can control the UGV as well as receive data from its many sensors, delivering mission-critical information straight to soldiers’ tactical user interface. It can also send essential reconnaissance and updates to higher echelons of command via the RC2S.