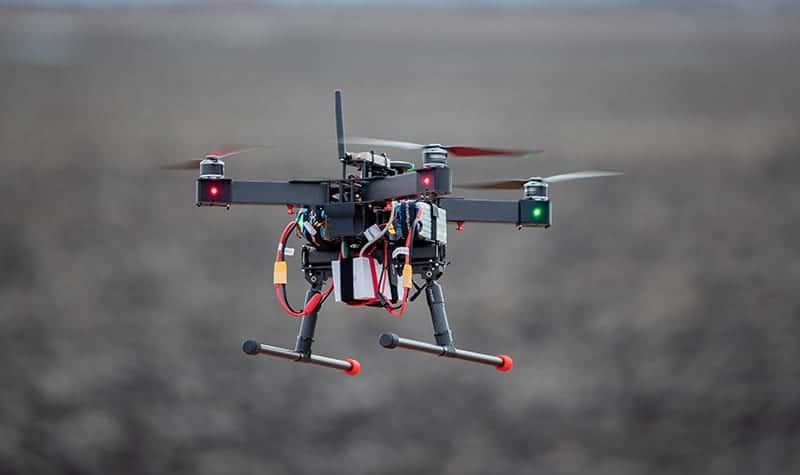 The University of North Dakota has announced that, along with research partners from Harris Corporation and the Northern Plains Unmanned Aircraft Systems Test Site (NPUASTS), it has successfully completed initial field testing for a first-of-its kind command and control (C2) ground radio network to support beyond visual line of sight (BVLOS) drone flights this week.

Currently, UAS operations are limited to short distances, largely because reliable long-distance communications solutions have not been available. The Harris UAS Network’s C2 service, however, makes safe and routine BVLOS operations possible by allowing pilots to send commands to unmanned aircraft that are necessary for take-off, maneuvering, landing and maintaining control at all times. The unmanned aircraft use the same link to report important information back to the pilots, such as aircraft location, battery life and images collected using on-board cameras. This C2 service is aligned with the Command-and-Non-Payload Communications (CNPC) radio standards that are being developed specifically for integrating drones into the national airspace.

The global UAS industry is forecast to be a $100-billion sector by 2026. Mark Askelson, interim executive director of UND’s Research Institute for Autonomous Systems (RIAS), said the activation of the BVLOS C2 service moves North Dakota closer to unleashing this multi-billion-dollar industry.

“With each testing step, we get closer to realizing the tremendous benefits, both humanitarian and economic, that BVLOS operations provide,” Askelson said.

North Dakota’s willingness to invest in UAS technology has led to several UAS successes for the state, including the deployment of the Harris UAS Network, the nation’s first and only infrastructure for multi-user BVLOS drone applications, at the end of 2018.

The Harris UAS Network, part of a North Dakota Department of Commerce Research ND project, can be expanded into a statewide infrastructure supporting BVLOS UAS operations. George Kirov, vice president and general manager, Commercial UAS Solutions, Harris, said the deployment of the Harris UAS Network and the activation of its C2 service continues to validate and enhance the attractiveness of North Dakota as a leading hub for UAS innovation and commerce.

“North Dakota is unique in the combination of political leadership, sustained investment in UAS, deep research talent at its leading universities and unmatched technical and operational expertise at its UAS test site,” Kirov said. “This made the deployment of the Harris UAS Network possible, which is just one example of how the state is positioning for technology-driven economic development and growth.”

According to Chris Theisen, director of research and development for the NPUASTS, who leads testing of the technologies that make up the current Harris network, having a network infrastructure to enable longer UAS flights is extremely valuable.

“The end solution to enable expanded UAS operations is going to be a layered approach,” he said. “This network has provided the initial steps in understanding that layered environment and will allow for growing the commercial UAS activities in the region.”

UND, NPUASTS and Harris have plans to expand flight operations and testing as well as to continue to add new capabilities to the UAS Network between Grand Forks and Fargo. The partners are confident that new companies will be attracted to the region to take advantage of this unique infrastructure and to participate in cutting edge UAS research, development and operations.