Unmanned Delivery Solutions to be Created in Japan 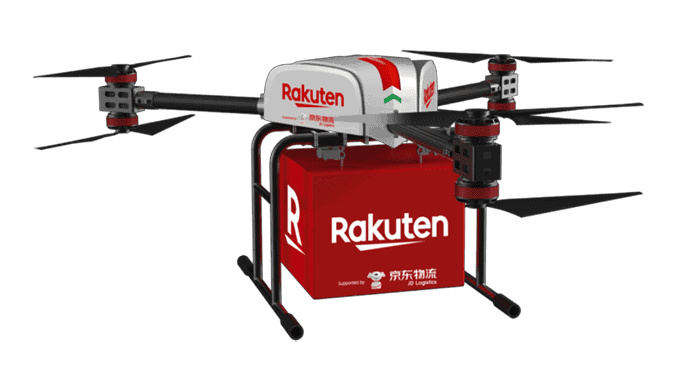 Rakuten and Chinese retailer JD.com have announced that the two companies have signed an agreement that will see JD.com’s unmanned aerial vehicles (UAVs) and unmanned ground vehicles (UGVs) utilized in Rakuten’s unmanned delivery solutions in Japan.

Under this agreement, Rakuten will combine its experience in drone delivery service operations in Japan and IT solutions, such as its dedicated shopping apps, with JD.com’s expertise in drones and UGVs, which have a proven track record in China. The two companies will collaborate on Rakuten’s lineup of unmanned delivery services to suit a wide range of applications and situations.

Rakuten launched its Rakuten Drone delivery service in 2016, and has gained experience through providing delivery services and trials in collaboration with corporate partners and local governments. In 2018, its first delivery trial was conducted using a combination of drones and UGVs, a step toward solving the last mile challenge for the logistics sector in Japan.

“We are delighted to begin this collaboration with JD.com, which boasts the most cutting-edge proprietary delivery network in China as well as a track record and know-how in delivery with drones and UGVs,” said Koji Ando, Group Managing Executive Officer of Rakuten, Inc. “By utilizing JD.com’s drones and UGVs with the unmanned delivery solutions created by Rakuten, we hope to accelerate innovation in the Japanese logistics sector and contribute to building a society that can offer greater convenience to all citizens.”

JD.com began developing its drone program in 2015 and launched the world’s first commercial drone deliveries in 2016 in rural China in Jiangsu, Shaanxi, and other provinces. Since then, JD’s drones have logged more than 400,000 minutes of delivery flight time. In January 2019, the company announced the success of Indonesia’s first government-approved drone test flight, opening the door for future commercial drone use in Indonesia and Southeast Asia. On the ground in China, its UGVs are being used for delivery service in urban areas in several cities and these autonomous delivery robots are becoming frequent sights on a number of university campuses. JD.com has also launched two smart delivery stations in the cities of Changsha and Hohhot, transforming last-mile logistics and further increasing delivery speeds to customers.

“We have been using drones and autonomous delivery robots for real deliveries in China for over two years,” said Jun Xiao, president of JD-X, JD’s logistics innovation lab. “This is one way we are innovating to make logistics more accessible, reliable and cost-effective. In Japan there are many opportunities for drones to make deliveries in mountainous areas, remote islands, and in emergency situations. As we push the bounds of what our unmanned delivery technology can do, and explore its use in a wide range of applications from e-commerce to humanitarian support, we believe it will continue to bring significant benefit to people around the world.”

Rakuten and JD.com aim to accelerate the development and commercialization of Rakuten’s unmanned delivery solutions in Japan and will cooperate to promote convenience and innovation in society.

Overview of unmanned vehicles likely to be deployed: