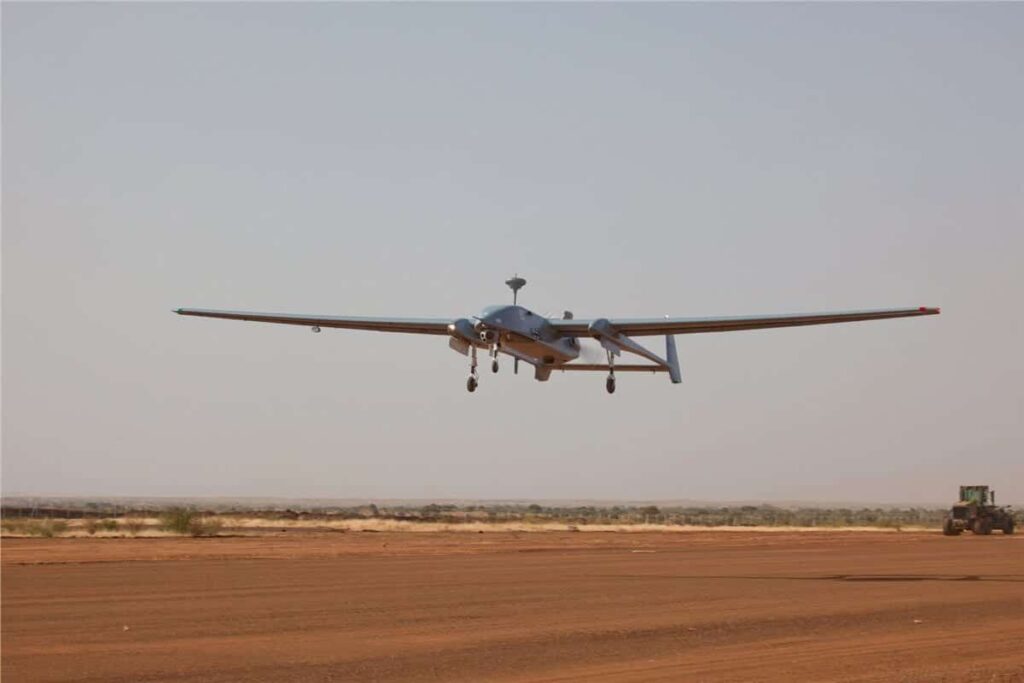 Airbus Defense and Space has announced that Germany has extended the contracts for operation of the Heron 1 unmanned aerial vehicles (UAVs) provided by Airbus DS Airborne Solutions GmbH until mid of 2020. These contracts have been signed with the Federal Office of Bundeswehr Equipment, Information Technology and In-Service Support.

This renewed contract marks the continuation of a successful cooperation’s between the Bundeswehr and Airbus Defence and Space. The contract comprises the provision of all assets and manpower to support the Israeli Heron 1 systems operations in the two countries of deployment. Heron 1, manufactured by the IAI (Israeli Aerospace Industries), is a medium altitude long endurance (MALE) unmanned aerial system (UAS) which can stay airborne above the respective operational area for very long periods and can be operated from unpaved runways under harsh environmental conditions.

The Heron 1 has a wingspan of about seventeen meters and a maximum mission duration of more than twenty-four hours. The detection of IEDs from the air, convoy and patrol unit escort, route exploration and supervision, creation of movement profiles and long-term supervision, support for status reports as well as object and camp protection rank among the military tasks. In addition the system is also used for security and humanitarian support operations.

The Air Force has been using the Heron 1 system in Afghanistan since 2010 and in Mali since 2016. The Heron 1 system makes an indispensable contribution to the protection of soldiers and civilians in the operational areas. With its operational range of up to 800 kilometers it significantly expands the possibilities of airborne reconnaissance of the German contingent. Until today, in total and over both countries, more than 46,000 operational flying hours have been successfully flown.

Airbus is responsible for provision, maintenance and repair of the systems and guarantees the agreed operational availability of Heron 1 in both Afghanistan and Mali on basis of a services model. For this purpose, Airbus has technicians and UAS specialists, on-site in Mazar-I-Sharif (Afghanistan) and Gao (Mali) who maintain the drone system and carry out test flights thus ensuring that the drones are available to the Bundeswehr at any time, as contractually agreed. This services model permits the Bundeswehr to concentrate completely on the fulfillment of its mission during operation, without being additionally burdened by the maintenance of the system.

“In Afghanistan and Mali, the services model has proven its performance capability by reaching a system availability of more than 98%. The proven capability of the Heron system to support worldwide deployment missions is reflected in these contract extensions as well as in the signed contract on the next generation RPAS MALE HERON TP,” said Ralf Hastedt, Head of Sales and Business Development of Airbus DS Airborne Solutions GmbH.

“We are very pleased to see the satisfaction of the German Air Force with the Heron UAS activities and the excellent cooperation with Airbus DS Airborne Solutions, forming the basis for such a renewed contract extending the capabilities for long-range airborne reconnaissance of the German Air Force in Afghanistan and Mali by at least another year,“ said Moshe Levy, IAI Executive Vice President and General Manager of IAI Military Aircraft Group.