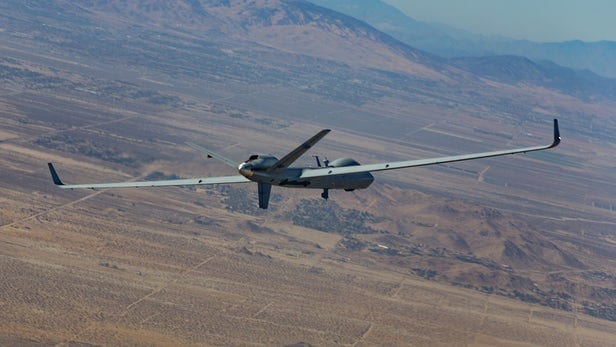 General Atomics Aeronautical Systems, Inc. (GA‑ASI) has announced that it has received a Special Airworthiness Certification in the Experimental Category from the FAA for its second MQ-9B SkyGuardian unmanned aerial system (UAS). The company-owned Remotely Piloted Aircraft (RPA) – registered as N191FP and known as YBC02 – joins the first SkyGuardian in support of the MQ-9B development program. This certification permits YBC02 to conduct flight operations in National Airspace (NAS) as a civil aircraft.

“The certification helps us towards our goal of full integration of RPA into the National Airspace System [NAS],” said David R. Alexander, president, Aircraft Systems, GA-ASI. “It will also help us in continuing the development of MQ-9B for our customers, the Royal Air Force and Belgian Defense.”

MQ-9B is the result of a five-year, company-funded effort to deliver an unmanned aircraft that can fly in non-segregated airspace, while meeting the stringent airworthiness type-certification requirements of NATO STANAG 4671. The RPA features endurance of more than 40 hours, rapid integration of new payloads using nine hardpoints, all-weather, short-field, self-deployment through SATCOM controlled Automatic Takeoff and Landing Capability, Lynx Multi-mode Radar and a Detect and Avoid (DAA) system. GA-ASI designed MQ-9B as the next generation of multi-mission Predator B fleet and named its baseline MQ-9B aircraft SkyGuardian, and the maritime surveillance variant SeaGuardian.

The first SkyGuardian aircraft (YBC01) was the first Medium-altitude, Long-endurance (MALE) RPA to fly non-stop across the Atlantic Ocean. MQ-9B SkyGuardian has been selected by the United Kingdom (as part of the Royal Air Force’s PROTECTOR RG Mk1 program), and was recently announced as the sole source RPA selection by the country of Belgium.