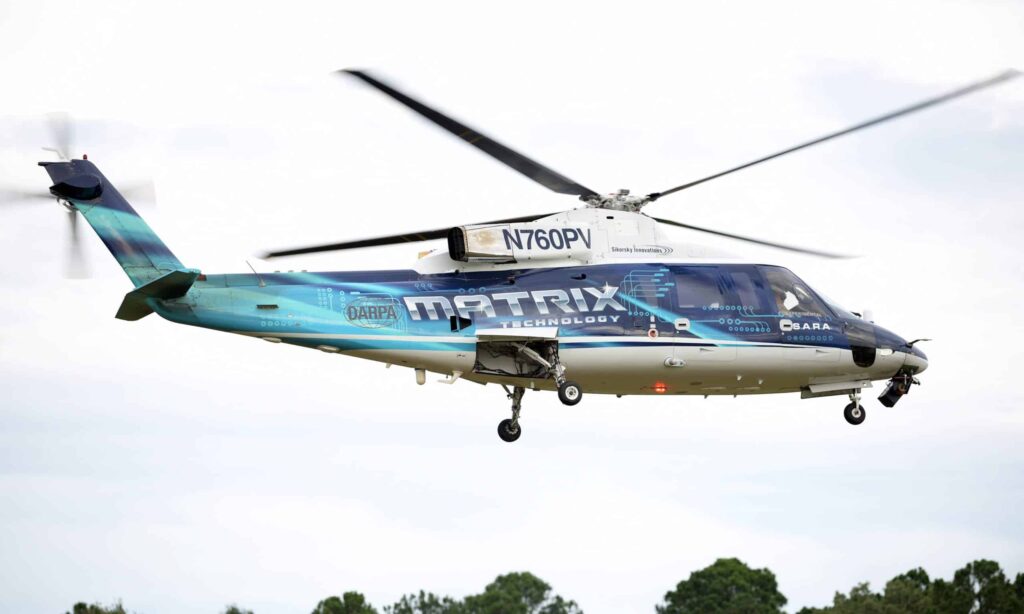 The U.S. Army has announced that it has used supervised autonomy to direct an optionally-piloted helicopter (OPV) through a series of missions to demonstrate technology developed by Sikorsky and the Defense Advanced Research Projects Agency (DARPA). The series of flights marked the first time that non-Sikorsky pilots operated the Sikorsky Autonomy Research Aircraft (SARA), a modified S-76B commercial helicopter, as an OPV aircraft.

“Future vertical lift aircraft will require robust autonomous and optimally-piloted systems to complete missions and improve safety,” said Chris Van Buiten, vice president, Sikorsky Innovations. “We could not be more thrilled to welcome Army aviators to the cockpit to experience first-hand the reliability of optimally-piloted technology developed by the innovative engineers at Sikorsky and DARPA. These aviators experienced the same technology that we are installing and testing on a Black Hawk that will take its first flight over the next several months.”

SARA, which has more than 300 hours of autonomous flight, successfully demonstrated the advanced capabilities developed as part of the third phase of DARPA’s Aircrew Labor In-Cockpit Automation System (ALIAS) program. The aircraft was operated at different times by pilots on board and pilots on the ground. Sikorsky’s MATRIX Technology autonomous software and hardware, which is installed on SARA, executed various scenarios including:

The recent Mission Software Flight Demonstration was a collaboration with the U.S. Army’s Aviation Development Directorate, Sikorsky and DARPA. The Army and DARPA are working with Sikorsky to improve and expand ALIAS capabilities developed as a tailorable autonomy kit for installation in both fixed wing airplanes and helicopters.

Over the next few months, Sikorsky will for the first time fly a Black Hawk equipped with ALIAS. The company is working closely with the Federal Aviation Administration to certify ALIAS/MATRIX technology so that it will be available on current and future commercial and military aircraft.

“We’re demonstrating a certifiable autonomy solution that is going to drastically change the way pilots fly,” said Mark Ward, Sikorsky Chief Pilot, Stratford, Conn. Flight Test Center. “We’re confident that MATRIX Technology will allow pilots to focus on their missions. This technology will ultimately decrease instances of the number one cause of helicopter crashes: Controlled Flight Into Terrain (CFIT).”

Through the DARPA ALIAS program, Sikorsky is developing an OPV approach it describes as pilot directed autonomy that will give operators the confidence to fly aircraft safely, reliably and affordably in optimally piloted modes enabling flight with two, one or zero crew. The program will improve operator decision aiding for manned operations while also enabling both unmanned and reduced crew operations.