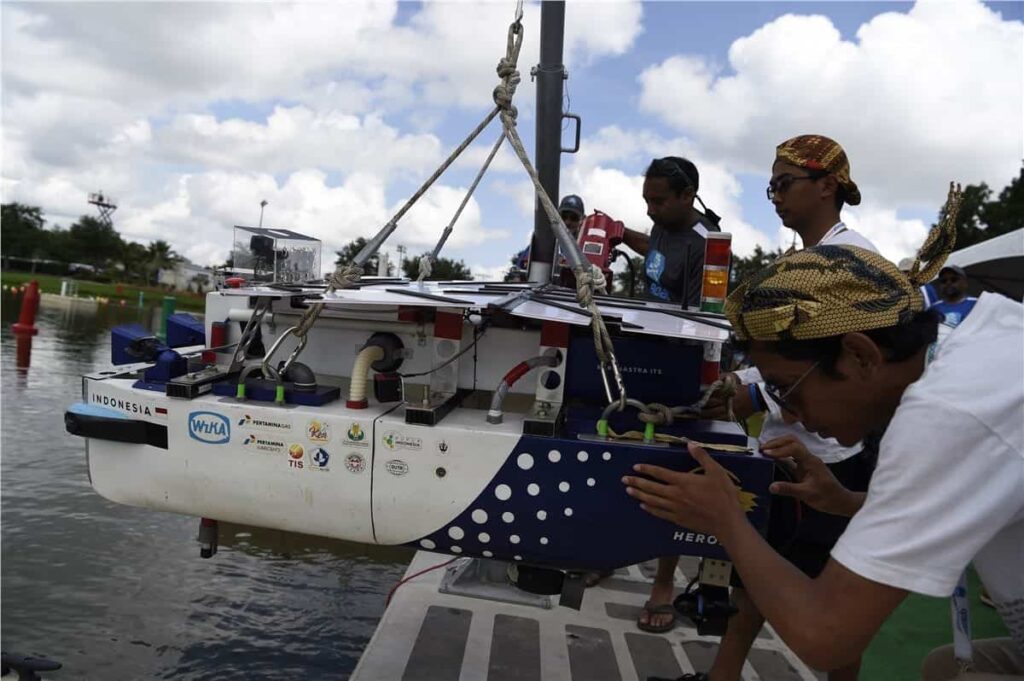 The U.S. Navy has announced that its Office of Naval Research (ONR), in conjunction with the Association for Unmanned Vehicle Systems International Foundation, has sponsored the 11th annual International RoboBoat Competition, in which teams of students representing 13 schools from six different countries tested their engineering skills by developing autonomous boats.

RoboBoat is an annual robotics contest where the next generation of engineers puts autonomous surface vehicles (ASVs) through a series of advanced, water-based challenges that mirror real-world maritime operations.

“The challenges might seem simplistic, but before the boats even make it to the water to try and complete the course, there’s a lot of complex engineering that goes into the ASVs’ development,” said Kelly Cooper, a program officer in ONR’s Ship Systems and Engineering Research Division and a RoboBoat judge. “This competition really showcases the technical ingenuity of the students.”

That ingenuity will be needed as the desire for autonomous systems continues to grow – not only for the naval service, but across the commercial sector – as companies like Dominos, Amazon and Uber all want to use autonomous vehicles for deliveries.

And while these companies are making strides toward autonomous services for the average consumer, the Department of the Navy (DoN) is looking to use the technology to “create fundamental shifts” in the way the Navy and Marine Corps conduct future naval operations.

According to the recently-released DoN Strategic Roadmap for Unmanned Systems (short version), the goal is to “transform modern warfare” by seamlessly integrating unmanned systems into the naval services and across all domains. This is something ONR is already doing – pushing the path forward for autonomous technologies like swarming boats, aerial vehicles and unmanned surface ships and helicopters.

“RoboBoat showcases the talents of future engineers and serves as a basic introduction to some of what the Navy needs its autonomous systems to do,” said Cooper. “We know there will be a strong pull from the commercial sector to have these kids come work for them, but we want the participants to know that the future is bright with the naval services as well. We have the jobs and we need their talent, too.”

As in the past, this year’s teams were largely composed of university students and were evaluated on their vessel design and performance. The design component focused on innovation, quality of engineering and craftsmanship. The performance component tested a vehicle’s ability to execute specific missions on the water without any human interaction.

As part of the performance challenge, the ASVs had to demonstrate their speed and navigation capabilities by passing through a set of gates before competing for any mission challenge points.

The mission tasks demonstrated the maritime systems’ autonomous behavior in different scenarios, including: speed; automated docking, which demonstrated the ability to launch and communicate with an aerial drone; finding a path in a crowded area; target identification; precise navigation; and, finally, return to dock.