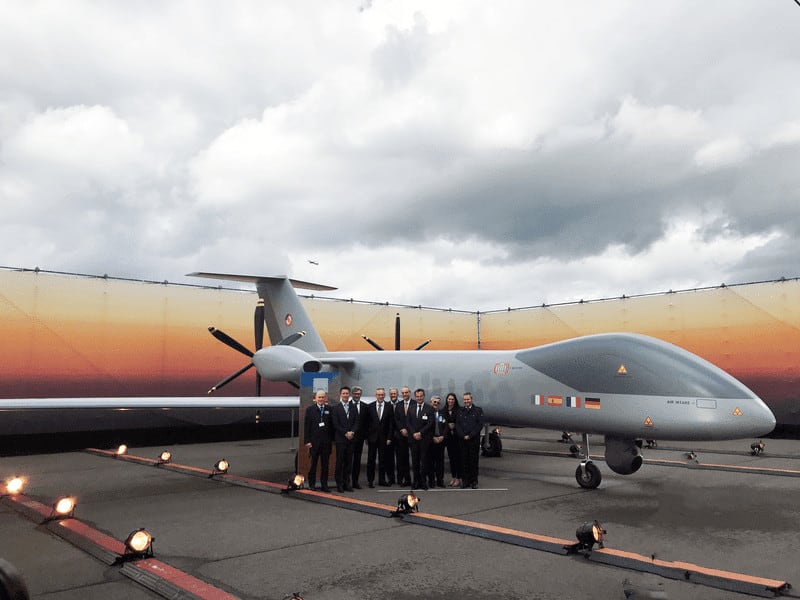 Airbus Defence and Space has announced that, in conjunction with Dassault Aviation and Leonardo, it has unveiled the first full scale model of the European Medium-Altitude Long-Endurance Remotely Piloted Aircraft (MALE RPAS) at the 2018 ILA Berlin Air Show.

The unveiling of the full scale model and the reaffirmed commitment of the industrial partners to jointly develop a sovereign solution for European Defence and Security comes after a nearly two-year definition study launched in September 2016 by the four participating nations, Germany, France, Italy and Spain, and follows the Declaration of Intent to work together on a European MALE unmanned aerial system signed by the countries in May 2015.

“While still a lot of work lies ahead of us, this full scale model represents a first milestone of what Europe can achieve in a high-technology sector if it bundles its industrial strength and know-how, ” said Dirk Hoke, CEO of Airbus Defence and Space. “The MALE RPAS will become an integral part in guaranteeing Europe’s sovereignty in the future. This programme is ideally suited to meet urgent capability requirements of Europe’s armed forces. This innovative partnership also eases the countries’ constrained budgetary situation through clever pooling of research and development funds.”

“Today’s unveiling reflects our companies’ total dedication to the European Defence and Security sovereignty. Cooperation and high technology legitimate the leadership of the European Industry and guarantee the strategic autonomy of Europe,” declared Eric Trappier, Chairman and CEO of Dassault Aviation. “Innovative programmes through efficient partnerships will serve European competitiveness and will offer new alternatives to the off-the-shelf acquisition of non-European products. Dassault Aviation reaffirms its full support to Airbus Defence and Space as programme leader of the MALE RPAS.”

“Unmanned technologies and their applications represent one of the key technological foundations for the future evolution of European Defence Industries,” said Lucio Valerio Cioffi, Leonardo’s Aircraft Division Managing Director. “The European MALE RPAS is orientated to foster the development of high technologies and will contribute to sustaining key competencies and jobs within Europe providing Armed Forces with an high performance and sovereign operational system.”

The MALE is the first unmanned aerial system designed for flight in non-segregated airspace, and its characteristics will include mission modularity for operational superiority in intelligence, surveillance and reconnaissance, both wide area and in-theatre.

The twin-turboprop propulsion system will supply ample on-board energy for the mission system, and provide proper redundancy to limit restrictions when operating over European densely populated ground and unrestricted airspaces. In January 2018, the MALE RPAS successfully passed System Requirements Review (SRR), which initiated the second phase of the definition study to lead to a System Preliminary Design Review (SyPDR), scheduled for the end of this year.

The SyPDR will demonstrate the quality and fitness for the proposed design. “Air Traffic Integration and certification are key objectives, giving the participating States full confidence that the development step can be launched with acceptable residual risks. Preparations for the next stage (development, production and initial in-service support) are already well under way. Entry-into-service of European MALE RPAS is planned for the middle of the next decade.