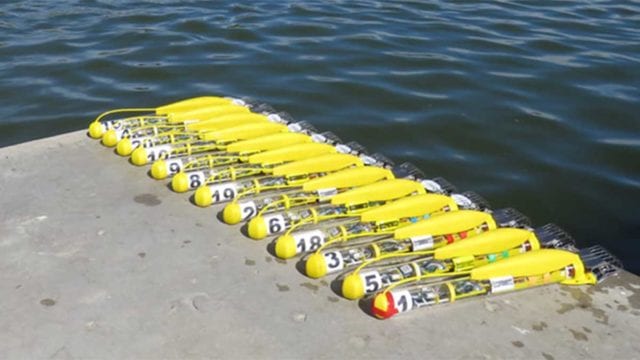 Aquabotix, an underwater robotics company, has announced the release of SwarmDiver, a micro unmanned surface vehicle (USV) and unmanned underwater vehicle (UUV) that operates in a swarm. Multiple SwarmDivers can function simultaneously as a single coordinated entity, be easily controlled via one operator on the surface, and perform dives on command to collect valuable intelligence.

Whitney Million, Aquabotix’s Chief Executive Officer, commented: “This vehicle is a game-changer for both the industry and Aquabotix. Until today, there were simply no micro hybrid USV / UUV vehicles and no swarming unmanned vehicles with diving capabilities, commercially available in the industry. Aquabotix has changed that.”

“Maritime swarming is rapidly becoming an area of focus for naval forces globally, and SwarmDiver leads a revolution in underwater technologies. SwarmDiver advances amphibious warfare tactics as it is engineered to handle dynamic operational situations, including Intelligence, Surveillance, and Reconnaissance (ISR) missions and sophisticated, coordinated assaults through tracking, trailing and overwhelming targets.”

“In addition to defense and security applications, SwarmDivers can be deployed in research, harbour management and oceanography.”

Key features of SwarmDiver include

Watch a video of SwarmDivers in operation below: