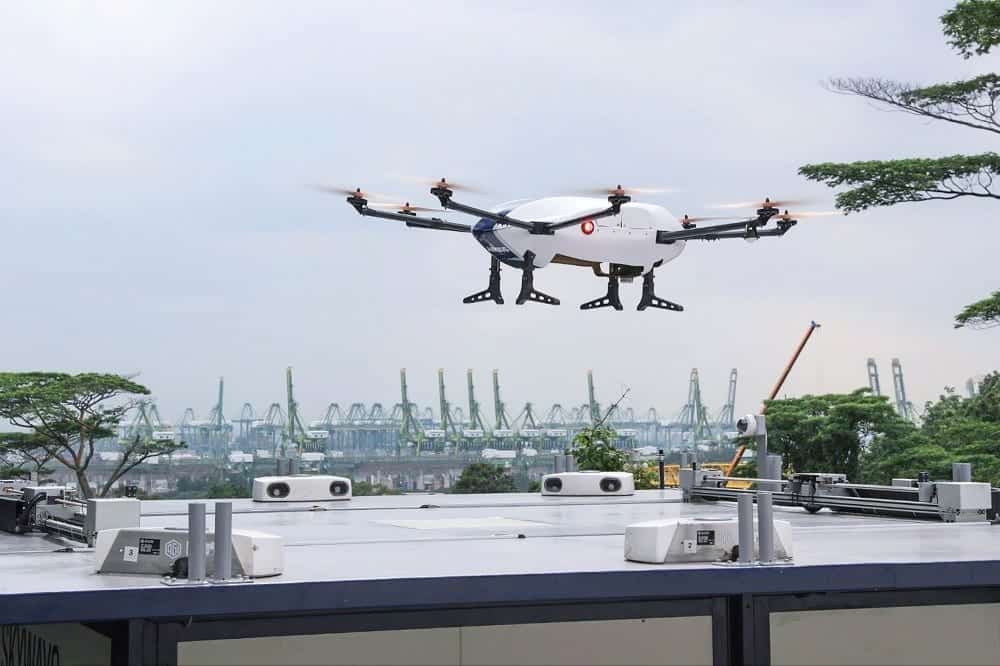 Airbus Helicopters has announced that its Skyways unmanned aerial vehicle (UAV) has successfully completed its first flight demonstration at the National University of Singapore (NUS). The drone took off from its dedicated maintenance centre and landed on the roof of a specially designed parcel station where a parcel was automatically loaded via a robotic arm. Once successfully loaded with the parcel, the Skyways drone took off again and returned to land, demonstrating its automatic unloading capability.

This inaugural flight demonstration follows the launch of the experimental project with the Civil Aviation Authority of Singapore (CAAS) in February 2016 to develop an urban unmanned air system to address the safety, efficiency, and sustainability of the air delivery business in cities such as Singapore. The collaboration was subsequently extended in April 2017 with Singapore Post (SingPost) becoming the local logistics partner to the project.

Airbus Helicopters is the overall Skyways system architect and provider, contributing its capabilities in drone platforms as well as its concept of future parcel delivery. This concept involves systems and structures that allow drones to land, dock with secure structures, discharge or take on payloads, and then fly off to other destinations.

“Today’s flight demonstration paves the way positively to our local trial service launch in the coming months. It is the result of a very strong partnership among the stakeholders involved, especially the close guidance and confidence from the CAAS,” said Alain Flourens, Airbus Helicopters’ Executive Vice President of Engineering and Chief Technical Officer. “Safe and reliable urban air delivery is a reality not too distant into the future, and Airbus is certainly excited to be a forerunner in this endeavour.”

Airbus Helicopters is at an advanced stage of the Skyways project. Various tests are already underway, and the unmanned air system will be demonstrated in the university when the trial service commences this year. Campus students and staff will be able to make use of Skyways to have small parcels between 2kg and 4kg delivered to designated parcel stations within the campus, which is the size of 150 football fields.

“The Skyways project is an important innovation for the aviation industry. CAAS has been working closely with Airbus on the project, with an emphasis on co-developing systems and rules to ensure that such aircraft can operate in an urban environment safely and optimally. For Singapore, this project will help to develop innovative rules to support the development of the unmanned aircraft industry in Singapore. We are pleased with the good progress that Skyways is making and look forward to deepening our partnership with Airbus,” said Mr Kevin Shum, Director-General, CAAS.

“The urban logistics challenge is complex and an ecosystem of parcel lockers and autonomous vehicles will be a key piece to solving this puzzle,” said SingPost Group Chief Information Officer, Alex Tan. “The trial service that is taking off later this year will be an important step forward for SingPost in our efforts to develop solutions for the future logistics needs of Singapore and other cities of the world.”

“Project Skyways aligns with NUS’ vision of serving as a living lab to pilot innovative technologies and solutions. The NUS community is very excited to be the first in Singapore to experience this novel concept of parcel delivery by drones – an endeavour that could redefine urban logistics,” said NU Senior Deputy President and Provost, Professor Ho Teck Hua. “Students from the NUS Faculty of Engineering also have the opportunity to gain valuable experience as interns with Airbus for this project. We look forward to working closely with Airbus, CAAS and SingPost to carry out the campus-wide trial.”

An experimental project aimed at developing a safe and economically viable aerial unmanned parcel delivery system for use in dense urban environments, Skyways is one of a number of innovative Urban Air Mobility projects currently being researched at Airbus. These also include the Racer high-speed helicopter demonstrator, as well as the Vahana and CityAirbus autonomous flying vehicle concepts.