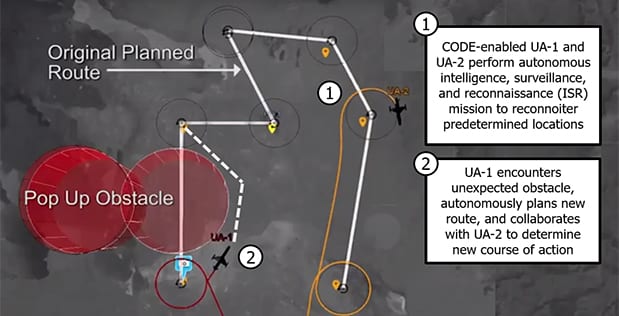 DARPA has announced that it has completed successful Phase 2 flight tests and moved into Phase 3 of its Collaborative Operations in Denied Environment (CODE) program, which aims to extend the capability of the U.S. military’s existing unmanned aircraft systems (UAS) to conduct dynamic, long-distance engagements of highly mobile ground and maritime targets in contested or denied battlespaces. Multiple CODE-equipped unmanned aircraft would navigate to their destinations and find, track, identify, and engage targets under established rules of engagement — all under the supervision of a single human mission commander.

DARPA has selected the Raytheon Company to complete the development of the CODE software during Phase 3. Once fully demonstrated, CODE’s scalable capabilities could greatly enhance the survivability, flexibility, and effectiveness of existing air platforms, as well as reduce the development times and costs of future systems.

“CODE is working to develop a low-cost approach to upgrade legacy unmanned aircraft and make them more effective through groundbreaking algorithms and software that enable them to work together with minimal supervision,” said Jean-Charles Ledé, DARPA program manager for CODE and acting deputy director of the Agency’s Tactical Technology Office (TTO).