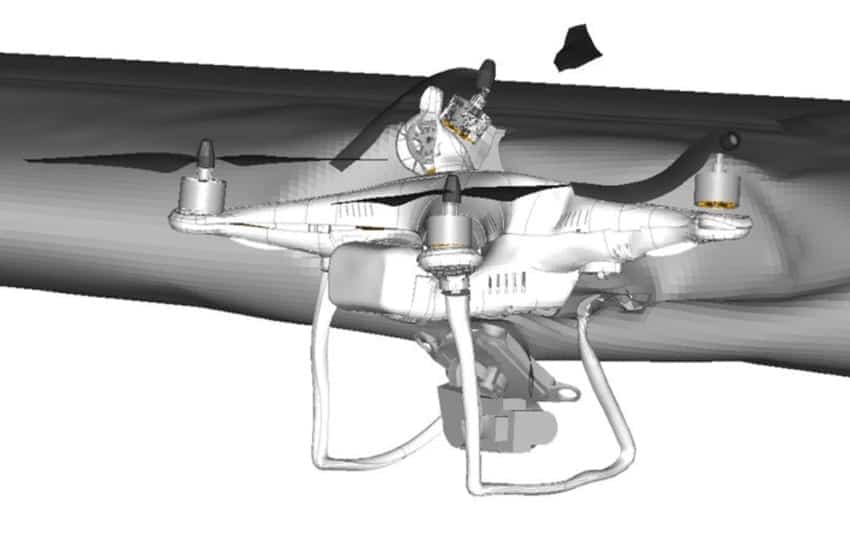 The Federal Aviation Administration (FAA) and Alliance for System Safety of UAS through Research Excellence (ASSURE) have announced the results of a study undertaken to bring better understanding to the physical damage associated with small unmanned aircraft systems (sUAS) colliding midair with commercial and business aircraft.

“While the effects of bird impacts on airplanes are well documented, little is known about the effects of more rigid and higher mass sUAS on aircraft structures and propulsion systems,” said Mississippi State University’s Marty Rogers, the Director of ASSURE. “The results of this work are critical to the safety of commercial air travel here in the United States and around the world.”

Researchers’ efforts began by first determining the most likely impact scenarios. This was done by reviewing operating environments for both sUAS and manned aircraft. The team then selected the commercial and business aircraft and sUAS based on these impact scenarios and their likely exposure to one another.

The commercial narrow-body air transport selected was characteristic of a Boeing B737 and an Airbus A320 aircraft, which represent 70% of the commercial aircraft fleet. The business jet model represented a Learjet 30/40/50. Similarly, the team selected a small quadcopter and a light fixed-winged unmanned aircraft as representative of the most-likely threats to manned aircraft.

Researchers determined the areas of manned aircraft most likely to be impacted as being the leading edges of wings, vertical and horizontal stabilizers, and windscreens.

ASSURE researchers also performed engine impact simulations on the fan section of an existing business-jet-sized, turbofan-engine model that the FAA previously used for fan blade-out testing. The FAA/ASSURE team conducted this research to better inform the scope of the next phase of research, as well as the critical variables essential to their continued research and engine ingest testing.

“Computer simulations, supported by material and component level testing, were conducted to determine the effects of sUAS impacts on manned aircraft,” said Gerardo Olivares, Ph.D., Director, Crash Dynamics and Computational Mechanics Laboratories at Wichita State University. “Conducting this study through full-scale physical tests would not have been possible from a cost and time perspective due to the immense complexity of the task. On the other hand, simulation enabled us to study over 180 impact scenarios in a twelve-month period. To ensure results accurately predict the actual physical behavior of collisions, we have spent a lot of time developing, verifying, and validating detailed models of manned and unmanned aircraft. Once the models are validated, we can use them in the future to investigate other impact scenarios.”

Researchers observed various levels of airframe and engine damage in all sUAS collision simulations. They confirmed that energy (projectile mass and velocity) and the stiffness of the sUAS are the primary drivers of impact damage. This research showed that the severity of the collision is also dependent on the design features of the sUAS and the dynamics of the impact.

Commercial aircraft manufacturers design aircraft structural components to withstand bird strikes from birds up to eight pounds for the empennage and four pounds for windscreen. ASSURE simulations show sUAS collisions inflict more physical damage than that of an equivalent size and speed bird-strike. sUAS components are much stiffer than birds, which are mostly composed of water. Therefore, bird-strike certification regulations are not appropriate for unmanned aircraft. Additionally, regulators do not require and manufacturers do not design commercial and business aircraft to withstand collisions from other aircraft.

The ASSURE research team also conducted both physical testing and simulation on sUAS lithium batteries. Typical high-speed impacts caused the complete destruction of the battery, therefore, in these cases, there was not an increased risk of fire due to a shorted battery. However, during some of the low-speed impacts, associated with landing and takeoff, the battery was not completely destroyed. In some of these simulations, the battery remained lodged in the airframe and there was potential for increased risk of battery fire.

The findings show the importance of properly researching and regulating the use of sUAS in a crowed national airspace system. While design features can decrease the severity of a drone impact, sUAS pilots and the public must be aware of and abide by regulations for safe sUAS operations. It is critical that everything be done to keep these collisions from occurring through the safe separation of all aircraft, both manned and unmanned. The FAA will depend on the sUAS community to help develop the technology for proper detect-and-avoid so that these aircraft do not meet in flight.

This is the first in a series of research projects conducted to understand and quantify the potential severity of airborne collisions. Future studies will research the severity of collisions with general aviation (GA) aircraft, rotorcraft, and high-bypass turbofan engines representative of those currently found in airline fleets. Because of the scope and magnitude of this research, and the impact it will have on industry and national airspace safety, the follow-on studies will be broken into multiple phases.

The complete report can be found here.