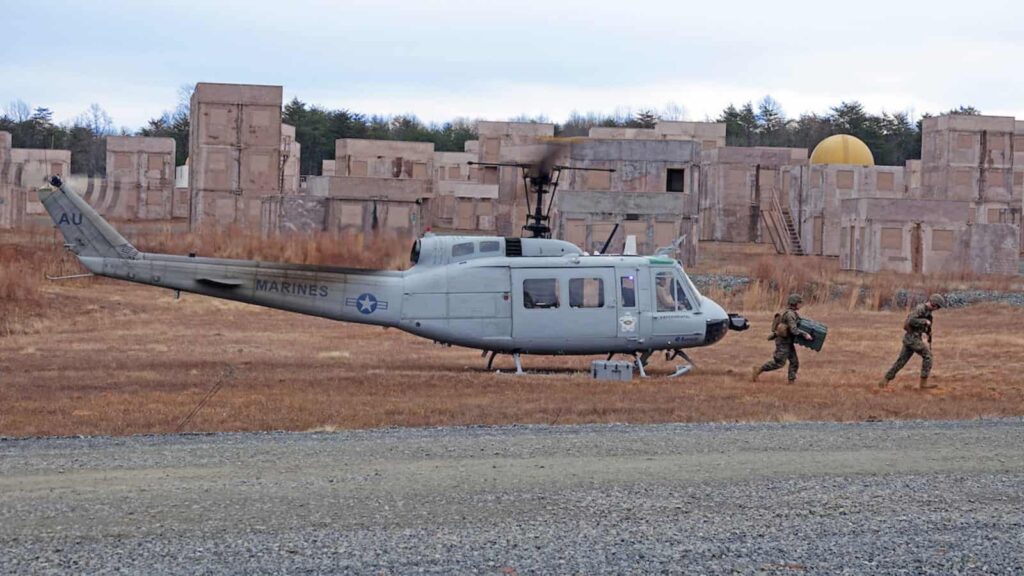 AACUS is an aircraft-agnostic hardware and software suite which enables a Marine on the ground to request a supply delivery via helicopter from a handheld tablet, requiring no advanced training to operate the system. AEH-1 is fitted with onboard LiDAR and camera sensors that enable it to detect and avoid obstacles and evaluate the landing zone. The system processes this information to perform onboard mission, route, and path planning to enable autonomous mission execution.

While previous demonstrations have showcased the system’s autonomy capabilities and interactions with trained operators, this is the first demonstration in which the aircraft performed cargo and utility missions in an operationally-relevant training environment with Marine interaction. As part of the demonstration, Marines loaded supplies for the aircraft before clearing the autonomy system for autonomous takeoff.

“The Marines’ vision for the future of vertical lift operation and support is optionally-piloted aircraft,” said AACUS Program Manager Stephen Chisarik. “Aurora’s system enables any rotary-wing aircraft to detect and react to hazards in the flight path, and make appropriate adjustments to keep the aircraft safe.”

“We’ve developed this great capability ahead of requirements and it’s up to us to determine how to use it,” said Lt. Gen. Robert Walsh, commanding general, Marine Corps Combat Development Command. “The young marines today have grown up in a tech-savvy society, which is an advantage. We’ve got to keep pushing and moving this technology forward.”

Aurora has developed multiple technologies under the AACUS program: the digital flight control system which enables the UH-1 to fly autonomously; and the Tactical Autonomous aerial LOgistics System (TALOS) autonomy technology. The AEH-1 was recently granted a Special Airworthiness Certificate by the Federal Aviation Administration (FAA), allowing the aircraft to operate autonomous with only a safety pilot onboard to monitor the controls.

These flights served as the final demonstration to ONR, Department of Defense representatives and other senior officials, the culmination of a successful five-year Innovative Naval Prototype (INP) program. Having completed the third and final phase of the program, AACUS will now transition to the Marine Corps for experimentation and potential acquisition.