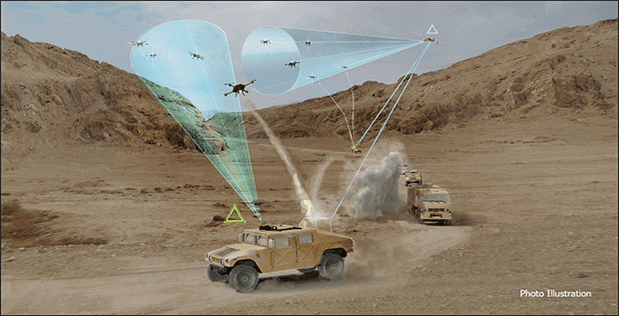 DARPA’s Mobile Force Protection (MFP) program focuses on a challenge of increasing concern to the U.S. military: countering the proliferation of small, unmanned aircraft systems (sUASs). These systems — which include fixed- or rotary-wing aircraft and have numerous advantages such as portability, low cost, commercial availability, and easy upgradeability — pose a fast-evolving array of dangers for U.S. ground and maritime convoys.

Countering these threats in real time requires a range of technology advances to enable rapid detection, identification, tracking, and neutralization of adversary sUASs—all while mitigating collateral damage. MFP, launched after DARPA issued a Request for Information (RFI) last year, aims to achieve these goals by developing scalable, modular, and affordable approaches that could be deployed within the next three to four years and nimbly evolve with advances in threats, tactics, and technology.

“The three teams we’ve assembled have innovative ideas for a versatile, layered defense system that could protect convoys on the move from multiple small unmanned aircraft systems in real time,” said Jean-Charles Ledé, a program manager in DARPA’s Tactical Technology Office (TTO). “Each team will now work to integrate novel ideas for advanced sensors and neutralization approaches into a common framework emphasizing safety for civilian bystanders, ease of operation, and low size, weight, power, and cost. Our goal is a technology demonstration system that could fit onto currently deployed tactical ground vehicles and maritime vessels—getting advanced and upgradeable capabilities quickly to the warfighters who need them.”

In addition to all DoD Services, DARPA is working closely on MFP with the Department of Homeland Security’s Science & Technology Directorate and the U.S. Coast Guard.

At the conclusion of each open-air demonstration, DARPA plans to offer the Services and other U.S. Government agencies the opportunity to fund extended field evaluations of the current technology demonstration system. DARPA’s goal is to develop the interim versions and the final prototype system to meet the needs of a broad number of potential U.S. Government and commercial users.