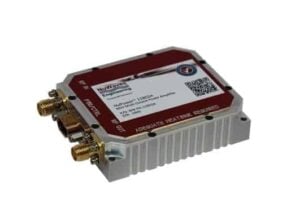 NuWaves Engineering, a provider of Radio Frequency (RF) and Microwave solutions, has announced the release of an upgraded broadband RF power amplifier (PA) for VHF to S-band transmitters and data radios. The NuPower 11B02A model features high power efficiency and multi-octave operation in a compact package.

The NuPower 11B02A model, part number NW-PA-11B02A, replaces the NuPower Mini Multi-Octave Power Amplifier model, part number NW-SSPA-MINI-10W-0.225-2.6, delivering a minimum of 7 Watts, and typically 10 Watts, of RF power from 225 to 2550 MHz when driven with a 3 dBm (2 milliwatt) RF input signal. Featuring an improved standby to transmit switching speed of less than 30 microseconds, the NuPower 11B02A allows the user to rapidly switch between the operating modes, conserving energy between transmit cycles in power-limited applications such as unmanned aircraft systems (UAS). The PA’s upgraded rugged aluminum chassis, at 2.34” x 1.96” x 0.620” in size, maintains the footprint of the original, allowing for drop-in compatibility between the two units. Further, the unit features a broad supply voltage range of +11 to +32 VDC, supporting an array of RF communications, telemetry and electronic warfare applications, including systems running on battery power.

“Our second generation miniature broadband power amplifier module has been improved in several areas as a result of customer feedback and NuWaves’ innate desire to improve our processes,” said Jeff Wells, President and CEO of NuWaves Engineering. “The NuWaves’ team has done an excellent job improving many aspects of the manufacturing process for this product, allowing us to better support the Warfighter through shortened production schedules.”