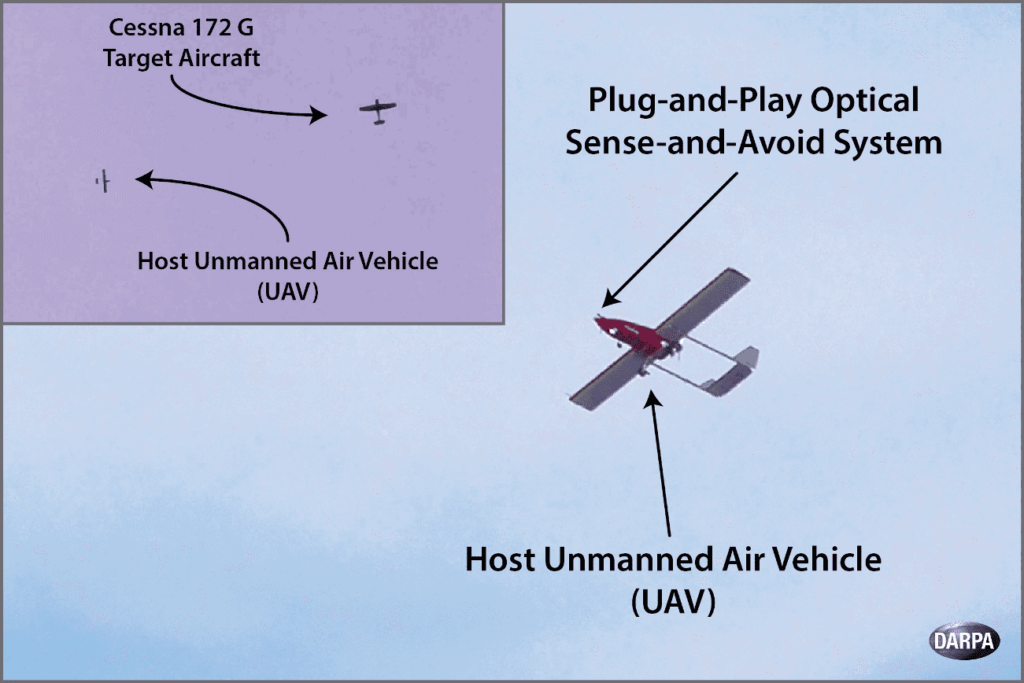 The integrated sense-and-avoid (SAA) system includes a single optical camera that provides imagery for detection and tracking. The system also incorporates passive ranging features that assess the likelihood of an incoming aircraft intersecting the flight path of its host aircraft, and collision-avoidance capabilities to determine the best way to steer the host aircraft out of harm’s way. The work is part of a DARPA effort to create a low-cost, easily installed system to detect oncoming or crossing aircraft and determine the best avoidance strategy compliant with standard rules that set minimum vertical and lateral distances between aircraft during flight.

“This successful flight test is a step toward adding external perception to ALIAS’ toolkit for advancing in-flight automation,” Dan Patt, “What pilot wouldn’t want to set a box on their dashboard that would provide an additional pair of eyes to alert of potential collisions? This SAA system has the potential to enable a wide range of manned and unmanned systems to safely integrate into an increasingly populated and complex airspace.”

DARPA has been developing this capability over the past two years and put the technology demonstration system through extensive preliminary testing before the recent flight tests, which evaluated only detection and tracking. Based on the success of those flights, DARPA is planning another phase of the effort, which includes joint funding from the U.S. Air Force Research Laboratory (AFRL).

This follow-on research would shrink the system size; further test the ranging and collision-avoidance features; mature additional capabilities of the system such as detecting aircraft below the horizon and in poor light conditions; and improve calculations for optimal aircraft trajectories to avert impending collision.

The system could ultimately serve as a line of defense in future layered air-traffic management systems that could include Automatic Dependent Surveillance-Broadcast (ADS-B) transponders and ground-based radar systems that are part of the federal NextGen effort. There is particular potential applicability for unmanned air systems or aircraft with reduced crew sizes.

The ALIAS program envisions a tailorable, drop-in, removable kit that would enable high levels of automation in existing aircraft and facilitate reduced need for onboard crew. The program intends to leverage the considerable advances that have been made in aircraft automation systems over the past 50 years, as well as the advances that have been made in remotely piloted aircraft technologies, to help shift and refocus pilot workloads, augment mission performance and improve aircraft safety.