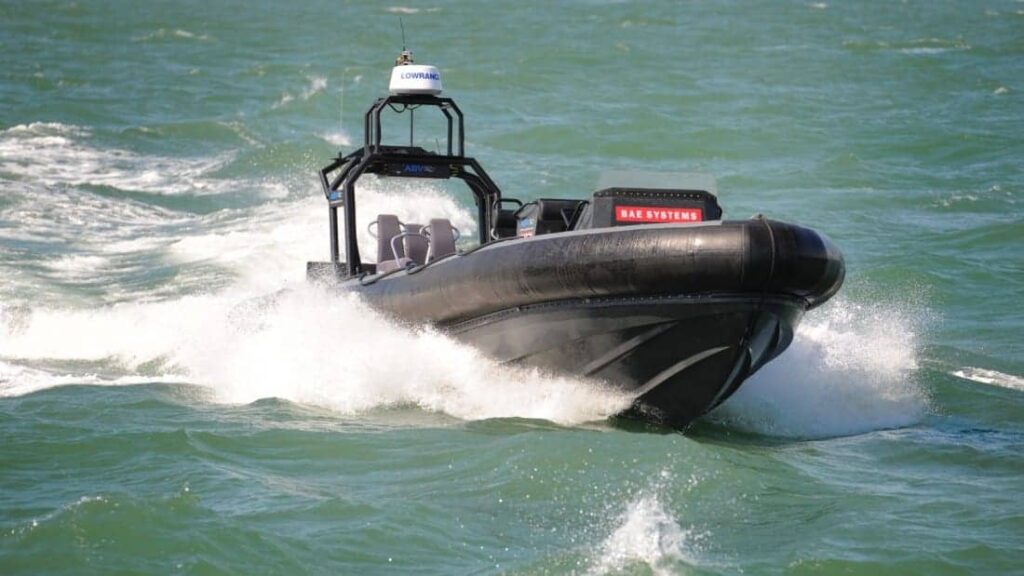 Unmanned technology with the potential to change the face of naval operations within a decade has successfully been demonstrated for the first time by BAE Systems in partnership with ASV at a site near Portsmouth Naval Base. The new system will allow crews to carry out vital tasks such as high speed reconnaissance and remote surveillance while keeping sailors out of harm’s way.

The modified boat is capable of operating autonomously for up to 12 hours at a time on either a pre-planned route or via remote control. It can reach speeds in excess of 38 knots (44 miles per hour), providing unique ship-launched manoeuvrability and enhanced situational awareness to support the decision-making of its operators. The technology is designed to be fitted to the Rigid Inflatable Boats (RIBs) like those already used extensively by the Royal Navy.

Underpinning the system’s ability to operate autonomously is its complex array of sensors, including a navigation radar, 360 degree panoramic infrared camera array and laser range finder which offer operators a detailed picture within a significant range of the vessel.

“This technology delivers an extremely robust and fast-moving unmanned boat that is able to perform a number of surveillance and reconnaissance roles, even when operating at high speed or in choppy water,” said Les Gregory, Product and Training Services Director at BAE Systems.

“BAE Systems has a wealth of experience in the development and integration of unmanned systems. The successful demonstration highlights the enhanced capability this technology offers. While other programmes are primarily designed for larger, slower boats to tackle mine counter-measure scenarios, this system provides an extremely manoeuvrable multi-role vessel.”

The unmanned system and software algorithms controlling the boat were provided by Portchester-based unmanned and autonomous specialist, ASV. BAE Systems has been working closely with ASV to integrate the technology and prove the concept through the demonstrator. The next stage in its development is to create the sensor suite before ensuring a seamless integration with the combat management system on the parent ship.

“This gives it the flexibility and sophistication to operate in a number of different tactical roles, whether it’s patrolling areas of interest, providing surveillance and reconnaissance ahead of manned missions, or protecting larger ships in the fleet.”

The boats will be able to operate up to 40km away from their parent ship. As well as being completely autonomous they can also be remote-controlled by crew on land, from the ship via a hand-held controller or piloted as usual.

The technology is designed as a retrofit to the manned Pacific 24 RIB already deployed across Type 23 Frigates and Type 45 Destroyers. These boats will also go on to the Queen Elizabeth Class aircraft carriers once they enter service.