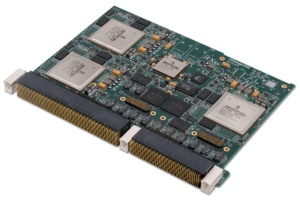 The XChange3100 was purpose-built to provide the Ethernet switching capability needed for the next generation of 6U systems. It features three Broadcom® BCM56450 Ethernet switches, each including 102.5 Gb/s of non-blocking switching, an on-chip ARM A9-based CPU, an integrated hierarchical traffic manager to reduce overall board complexity and power, and a feature-rich packet processing engine, all within a single 40 nm device.

Compliance with a Wide Variety of Industry Standards
The XChange3100 is the second generation of X-ES’ Katana switch line, which also includes the XChange3018 and XChange3013 3U VPX switches. All of X-ES’ switches include Managed Layer 2 Switching and optional Layer 3 Routing Management support.

The XChange3100 supports IEEE1588v2 transparent clocking and can be combined with the XPort3200 XMC/PMC Grandmaster Clock module, enabling tight synchronization between all devices connected to the switch.