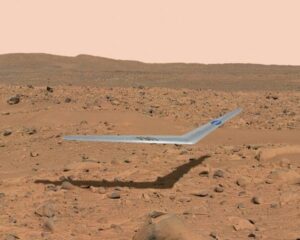 NASA has announced that a prototype of its Preliminary Research Aerodynamic Design to Land on Mars (Prandtl-m) flying wing aircraft is planned to be launched from a high altitude balloon later this year. The Prandtl–m will be released at an altitude of about 100,000 feet, which will simulate the flight conditions of the Martian atmosphere, said Al Bowers, NASA Armstrong Flight Research Center chief scientist and Prandtl-m program manager.

The tests could validate how the aircraft works, leading to modifications that will allow it to fold and deploy from a 3U CubeSat in the aeroshell of a future Mars rover. A CubeSat is a miniature satellite used for space research that is usually about four inches in each dimension. A 3U is three CubeSats stacked together.

“The aircraft would be part of the ballast that would be ejected from the aeroshell that takes the Mars rover to the planet,” Bowers said.” It would be able to deploy and fly in the Martian atmosphere and glide down and land. The Prandtl-m could overfly some of the proposed landing sites for a future astronaut mission and send back to Earth very detailed high resolution photographic map images that could tell scientists about the suitability of those landing sites.”

Because the Prandtl-m could ride in a CubeSat as ballast aboard the aeroshell/Mars rover piggyback stack going to Mars in 2022-2024, the additional weight would not add to the mission’s cost, he said. Once in the Martian atmosphere, the Prandtl-m would emerge from its host, deploy and begin its mission.

“It would have a flight time of right around 10 minutes. The aircraft would be gliding for the last 2,000 feet to the surface of Mars and have a range of about 20 miles,” Bowers said.

Before that happens, a configuration will be developed for the first of three tests here on Earth.

“We have a number of summer community college students coming that are going to help us design and build the aircraft that will complete the first phase of the mission,” Bowers said. “We’re going to build some vehicles and we are going to put them in very unusual attitudes and see if they will recover where other aircraft would not. Our expectation is that they will recover. As soon as we get that information, we will feel much better flying it from a high-altitude balloon.”

Bowers credits the idea of the Prandtl-m to a brainstorming session with colleague Dave Berger, a NASA Armstrong aeronautical engineer who specializes in flow physics and propulsion and works with the Education Office. While discussing potential projects for college students to get involved in, Berger and Bowers came up with the idea of helping to prepare a vehicle that could lead to a Mars flier.

“The actual aircraft’s wingspan when it is deployed would measure 24 inches and weigh less than a pound,” Bowers said. “With Mars gravity 38 percent of what it is on Earth, that actually allows us up to 2.6 pounds and the vehicle will still weigh only 1 pound on Mars. It will be made of composite material, either fiberglass or carbon fiber. We believe this particular design could best recover from the unusual conditions of an ejection.”

The Flight Opportunities Program, which is managed at NASA Armstrong, has agreed to fund two balloon flights during the next several years and potentially a sounding rocket flight following that to demonstrate how the flier would work on Mars, Bowers said. The flights will be at one of two locations – Tucson, Arizona, or Tillamook, Oregon. NASA’s Ames Research Center at Moffett Field, California, manages the Flight Opportunities solicitation and selection of technologies to be tested and demonstrated on commercial flight vehicles.

“We are going to use GPS initially, but obviously there is no GPS on Mars, so later on we will have to find something else for navigation,” Bowers said. “But the little autopilot that provides the waypoint navigation, that’s one of the things we’re going to exercise on a research vehicle and then on the prototype that flies on a future balloon flight.”

The flight test could also include some scientific research that will apply to a Mars mission.

“We could have one of two small science payloads on the Prandtl-m on that first balloon flight,” Bowers said. “It might be the mapping camera, or one might be a small, high-altitude radiometer to measure radiation at very high altitudes of Earth’s atmosphere. Eventually the aircraft may carry both of them at the same time.”

A second research flight from a balloon is planned for next year and would feature an aircraft capable of returning to the launch site on a flight that could be as long as five hours as it glides back to Earth, he said.

“We will do the same thing again with a balloon flight to about the same altitude,” Bowers said. “On that mission Prandtl-m would actually be inside a CubeSat container. The balloon would drop the CubeSat container and then the aircraft would deploy from the container right after the drop, unfold and fly away.”

Success could lead to a third mission that is already being discussed because the Flight Opportunities Program has access to a sounding rocket capable of going to very high altitudes, Bowers said.

“That mission could be to 450,000 feet and the release from a CubeSat at apogee,” he said. “The aircraft would fall back into the Earth’s atmosphere and as it approaches the 110,000-to-115,000-feet altitude range, the glider would deploy just as though it was over the surface of Mars.

“If the Prandtl-m completes a 450,000-foot drop, then I think the project stands a very good chance of being able to go to NASA Headquarters and say we would like permission to ride to Mars with one of the rovers.”