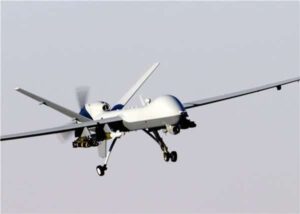 General Atomics Aeronautical Systems, Inc. (GA-ASI), a manufacturer of Remotely Piloted Aircraft (RPA) systems and related mission systems solutions, has announced that it has delivered a third Predator® B/MQ-9 Reaper® RPA to the French Ministry of Defense. Delivered less than two months after contract award, the aircraft joins two other French Reapers in service, which together have accumulated over 4,000 flight hours since operations began in January 2014.

“This latest order from the French Defense Procurement and Technology Agency (Direction Générale de l’Armement – DGA) is a testament to Reaper’s ability to enhance the ISR [Intelligence, Surveillance, and Reconnaissance] of the French Air Force in support of national, NATO, and other coalition operations,” said Frank W. Pace, president, Aircraft Systems, GA-ASI.

Pilots and sensor operators from Drone Squadron 1/33 ‘Belfort,’ 709 Air Base Cognac-Château Bernard are performing mission operations to include delivering increased battlefield situational awareness, augmenting combat search and rescue, and providing ground troop support. A total of 12 aircraft are planned to be in service by 2019.

The multi-mission Predator B is a long-endurance, medium-high-altitude RPA that can be used for ISR as well as targeting missions. The current aircraft configuration features an extensive payload capacity (850 lb/386 kg internally, 3,000 lb/1361 kg externally), with a maximum altitude of 50,000 feet/15240 meters, and can stay aloft for up to 27 hours.

Predator B is currently operational with the U.S. Air Force and Royal Air Force as MQ-9 Reaper and with the Italian Air Force as MQ-9. Predator B provides unparalleled close air support and persistent situational awareness over land or sea to coalition forces, demonstrating proven NATO interoperability. Some 240 Predator B aircraft have amassed more than one million flight hours since its first flight in 2001.