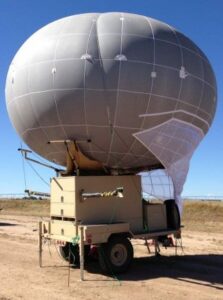 The upgrades and services are designed to expand the payload weight capability of the WASP tactical aerostat systems in order to integrate specialized wireless electronics, advanced optics and a communications package provided by L-3 Communication Systems-West (L-3 CS-West). Under the terms of an agreement between DAC and L-3 CS-West, a working group has commenced on a technical integration plan that includes integrating new technologies into the WASP and jointly marketing the integrated solution.

The DAC and L-3 CS-West working group will focus on upgrading the WASP system through the integration of an electro-optical and infrared (EO/IR) imaging tactical surveillance system coupled to an L-3 CS-West communications package, which will provide secure high-definition video imagery to ground-based devices such as L-3’s Remote Operations Video Enhanced Receiver (ROVER). The enhanced WASP systems and components are expected to be delivered to the U.S. Army in July 2015 and will be deployed in a month-long exercise to demonstrate the enhanced battlefield capabilities of the wireless-enabled WASP tactical aerostat system.

This upcoming DoD-sponsored exercise follows a previous U.S. Army exercise where the working group successfully integrated an L-3 CS-West wireless system, which was installed and flown on an Army-operated DAC aerostat system at U.S. Army Fort Polk, LA. The exercise was designed to demonstrate the effectiveness of distributing secure, live video feeds from a tactical aerostat directly to ground-based mobile devices such as One System Remote Video Terminals (OSRVTs) and ROVER systems currently deployed with U.S. ground forces. OSRVTs and ROVER systems are handheld or vehicle-mounted video and telemetry systems that provide soldiers with enhanced situational awareness, including real-time full-motion video data collected from manned and unmanned platforms.

Felicia Hess, CEO of Drone Aviation Holding Corp., stated, “The WASP system continues to advance in its evolution to potentially becoming a leading mobile tactical aerostat system for the military. The addition of the L-3 technology and team greatly expands the capabilities of the WASP and we look forward to working closely with our customers and new partners to provide the military with a unique solution designed to meet today’s evolving mission requirements.”

The WASP is a highly tactical and mobile aerostat system that provides communications range extension beyond that of normal tactical relay antennas. Operating at ten times the height of the tallest Army tower system, the WASP system can significantly extend the range of communications in remote and austere locations. The soldier-operated systems can be rapidly configured to support a variety of mission requirements for days, weeks or months with customized payloads, including voice and data communications and day/night video. The Army-owned WASP systems have successfully completed operations in a series of Army Network Integration Experiments (NIEs) and have been recognized by the Army as a tactical battlefield solution that can support soldiers on the ground.