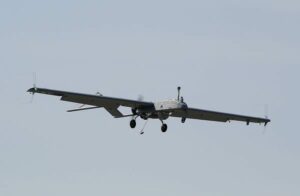 The unit is the first to receive the Shadow v2 and have it organically assigned to the battalion.

The 1/501st became the 3rd Squadron, 6th Cavalry Regiment, during a re-flagging ceremony, March 16 on Fort Bliss, making the unit the first Apache battalion to be converted to a heavy attack reconnaissance squadron.

“The re-flagging ceremony recognized the first unit to be equipped with the Shadow v2,” said Lt. Col. Tory Burgess, product manager for the Shadow Tactical UAS. “The re-flagging ceremony [takes a] years’ worth of planning, development, testing and production. We are finally getting to the point where we field two to three systems a month to the entire U.S. Army including the combat aviation brigades.”

A successful operational test, held as part of Network Integration Evaluation, or NIE, 14.2, had already taken place, in which UAS operators and Soldiers from Fort Bliss participated. Unit operators, maintainers and leadership are currently undergoing training on the new system.

“We’re the first Apache battalion to convert under the ARI (Aviation Restructure Initiative) to the heavy attack reconnaissance squadron,” said Lt. Col. RJ Garcia, commander of the 3rd Squadron, 6th Cavalry Regiment. “If you look at our history, we’ve always been the first of the firsts – first unit to field Apaches, and we’re very proud to be the first unit to convert to this new organization.”

Garcia said that within the history of manned-unmanned teaming, the Shadow and the Apache have had an incredible combat record. “This merging is really about the Soldier on the ground. We’re much more efficient, lethal and effective. We’re going to build on the great things that Soldiers across multiple organizations within the U.S. Army have done to be better.”

“It’s an improved capability that supports them as they execute the various missions that we assign them. Nothing is stove-piped now. We now have the ability to share across multiple levels,” he said.

New capabilities that the RQ-7Bv2 incorporates include: