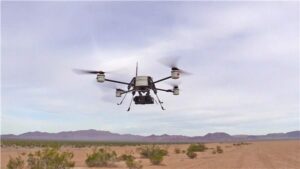 Remotec Inc., a subsidiary of Northrop Grumman Corporation, and AirRobot US, a manufacturer of unmanned multicopter systems, have announced that they have entered into a distribution agreement for AirRobot’s line of small unmanned aerial systems (UAS). Under the agreement, Remotec is the sole reseller of these products to the first responder and law enforcement market in the United States.

As part of the agreement, which commenced earlier this month, Remotec also will provide service, maintenance and technical support for all AirRobot systems in the U.S.

“This distributorship arrangement gives our customers access to a best-in-class small vertical takeoff and landing [VTOL] UAS product line that represents some of the most mature technology in the industry with a decade-long track record,” said Walt Werner, director, Remotec. “AirRobot systems complement Remotec’s UGVs to enhance our customer’s mission effectiveness both on the ground and in the air.”

AirRobot produces electrical powered multi-copter systems that can carry a payload weighing up to 7 pounds and fly for as long as 50 minutes. The systems can also carry a wide range of payloads – including multi-spectral cameras and recorders, synthetic aperture radar, gas and chemical sensors – and as many as three payloads simultaneously.

“We are proud to collaborate with Remotec, the largest provider of robots to the first responder market,” said Thomas Meyer, president of AirRobot US. “The products and capabilities perfectly complement each other, with each system providing increased operational value for the other. We also share and value Remotec’s commitment to the highest level of customer service.”

AirRobot systems, which have been in production since 2004, are based on the company’s proven proprietary flight management system. Hundreds of systems are in service that have flown thousands of missions in military, public and commercial applications worldwide. AirRobot systems have been certified for compliance with NATO standards and undergone testing by the U.S. Department of Defense and the U.S. Department of Homeland Security.

Northrop Grumman Remotec, based in Clinton, Tennessee, has been keeping danger at a distance for more than 25 years, providing rugged and dependable hazardous duty robotics for the military, explosive ordnance disposal teams, hazardous materials units, Special Weapons and Tactics units, and other first responders.