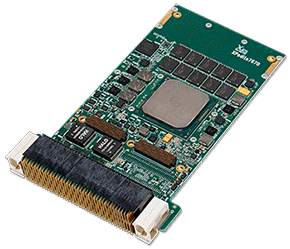 Extreme Engineering Solutions, Inc. (X-ES), a company that designs and builds embedded computing solutions, has introduced the XPedite7670 3U OpenVPX™ REDI single board computer module and its 6U VPX companion, the XCalibur4640, both based on the Intel® Xeon® D (formerly Broadwell-DE) processor family. The new single board computers are ideal for a wide range of embedded applications, including unmanned systems.

The Xeon D is a server-class System-on-Chip (SoC) based on power-efficient 14 nm technology, with support for up to eight Xeon® cores and two channels of ECC memory. The low-power SoC package brings Xeon®-class RAS (Reliability, Availability, and Serviceability) to embedded applications that require operation in the harshest environments.

The XPedite7670 is a high-performance, 3U OpenVPX™ REDI, single board computer with support for up to 8 GB of DDR3-1600 ECC SDRAM. The XPedite7670 maximizes network performance and connectivity with two 10 Gigabit Ethernet interfaces configured as XAUI or 10GBASE-KX4, and four Gigabit Ethernet interfaces configured as two 1000BASE-BX/KX (SerDes) ports and two 10/100/1000BASE-T ports. Local storage of up to 64 GB of SLC NAND flash allows an operating system and application to be installed directly onto the XPedite7670.

A x4 PCIe 3.0 interface, routed to the backplane P1 connector, supports communication with peripheral devices, as well as a Non-Transparent Bridge for direct communication with another processor. This reduces SWaP-C for the system integrator by eliminating the need for a separate switch module in the system. A x8 PCIe 3.0 interface and SATA 6 Gb/s port are routed to the onboard XMC site, allowing for further expansion. The XPedite7670 supports IPMI for system manageability, and integrates a Trusted Platform Module (TPM) for enhanced security.

The XCalibur4640 extends the XPedite7670’s functionality to a 6U VPX form factor with expanded capabilities. System memory capacity increases to 16 GB of DDR3-1600 ECC SDRAM and local storage increases to 128 GB of SLC NAND flash.

The XPedite7670 and XCalibur4640 offer Wind River VxWorks and X-ES Enterprise Linux (XEL) Board Support Packages (BSPs). Boot speed and security are enhanced by the provided coreboot firmware, powered by the Intel® FSP.