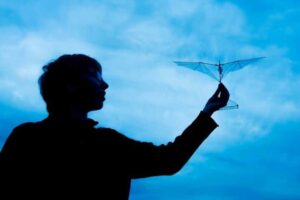 Researchers from Stanford University have announced that they have created a mechanism that could allow future flying robots to easily squeeze between obstacles, such as branches of a tree, and fully recover after accidental mid-air collisions. The researchers took inspiration from nature in creating the mechanism, examining the wings of birds and bats.

The results have been published in IOP Publishing’s journal Bioinspiration and Biomimetics.

Whilst animals have mastered the art of manoeuvring through complex environments, researchers have yet to design mechanisms that make it easy for man-made robots.

When it comes to flying, birds such as pigeons and swallows can morph their wings until they are tucked close into their body, allowing them to pass through gaps.

In their study, the researchers created one of the first mechanisms in which the morphing of the wing was completely passive, requiring no actuation to fold or unfold, making the wing much lighter and more reliable.

The robotic wing was modelled on bat and bird wings and was made using carbon fibre and Mylar film. Similar to a bird wing, each of the two robotic wings had a wrist joint, which were custom built using a 3D printer.

The pin joint connected the arm wing and the hand wing. The arm wing attached to the body of the robot at the shoulder joint, which initiated the flapping. The complete wing set had a wingspan of 400 mm and a length (chord) of 80 mm.

The wrist joint of the wing was hinged so, as the rest of the wing flapped, the hand could freely fold and unfold over the arm, much like origami folding, without any actuation.

The researchers performed theoretical, numerical and physical simulations on the robotic wing and successfully demonstrated that when the wing flapped, the folded hand wing was able to unfold back to the full wingspan configuration passively.

Co-author of the study Dr David Lentink said: ‘Both the math and simulations worked out, showing that both tiny and big flapping wings can all morph passively within a wing beat. We were surprised it worked so well.’

This is similar to how the flexible feathers of a bird allow for impact with obstacles without affecting the structural integrity of the wing.

Lead author of the study Amanda Stowers said: ‘While birds are capable of responding to unexpected disturbances to their wings, these same disturbances would break the wings of most drones. By adding a passive wrist joint, the flapping wing we have produced can withstand an impact and recover automatically back to its original position.

‘Furthermore, the flapping wing can resist impact with minimal added weight and without any computer intelligence or power.’

Dr Lentink continued: ‘After her discovery of passive wing morphing in the lab, I advised Amanda to hit her robot wing hard with a stick to see how well it could handle hard impact. We were both impressed that she could basically use a rod like a baseball bat and hit the hand wing of the robot, and it would still recover just fine.

‘This finding will greatly help make flapping winged drones much more robust. This is essential if we ever want to safely fly through a forest or land in a tree like a bird. The Office of Naval Research wanted us to find solutions to enable drones to fly in such cluttered environments, and this is a promising step forward.’