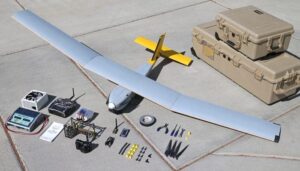 Hovercam-Media, a company that provides mapping and multimedia services, has announced that it has closed a new deal for exclusive Canadian distribution rights of the Lynx M UAV, developed by American firm Swift Radioplanes.

Several fixed-wing UAV trials were carried out by Hovercam-Media. Mr. Guy Savard, the President, and Mr. Patrice Savard, the Vice-President, settled on the Lynx M, a system which has received a Certificate of Authorization (COA) from the Federal Aviation Administration (FAA) in the United-States, the equivalent of a Special Flight Operating Certificate (SFOC) in Canada.

Patrice Savard commented: “Swift Radioplanes’ motto is: we sell what we use, which represents exactly the spirit that has been guiding Hovercam-Media since its creation in 2013. The Lynx M will now be the fixed-wing UAV reference for customers and partners within the northern territory.”

Now that this new system has been added to Hovercam-Media’s line, the UAV integration department can recommend a system tailored to the customer’s requirements. The Hovercam-Media team offers its customers comprehensive training on the use of various sensors used for the collection of information with all of its systems (photogrammetric and infrared rays, etc.)

The Lynx M has a three hour flight capacity. Guy Savard has personally attended a flight lasting over two hours and fifty minutes, and commented: “The endurance of the aircraft represents a major asset in the selection of our new partner.”