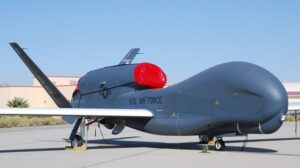 The U.S. Air Forces Central Command has announced that one of its RQ-4 Global Hawk unmanned aircraft has reached the 10,000 flying hour milestone while on an Operation Inherent Resolve mission at an undisclosed location in Southwest Asia.

RQ-4 Global Hawk aircraft 2019, or “A2019”, is the first Global Hawk to reach the 10,000 hour flying milestone. During its service, the aircraft has been providing support to warfighters by relaying communications between people and aircraft as well as enabling airstrikes on the Islamic State of Iraq and the Levant/Da’esh forces.

“This particular aircraft carries the Battlefield Airborne Communications Node (BACN) payload, which replaces the imagery sensors normally installed in the aircraft,” said Lt. Col. Anthony, launch and recovery element operations supervisor. “It is primarily a data and communications bridging node. It can support multiple bridges simultaneously across multiple radio types. We like to call it ‘Wi-fi in the sky’.”

Both manned and unmanned aircraft continue to fly in support of Intelligence, Surveillance, and Reconnaissance requirements for Operation Inherent Resolve. ISR helps coalition leaders gain better insight about the security situation on the ground, and strengthen the ability of Iraqi and Kurdish ground forces and their international partners to effectively counter ISIL.

The accomplishment of flying more than 10,000 hours was shared by the entire Hawk Aircraft Maintenance Unit and supporting units.

“It takes a team effort to maintain an aircraft,” said Staff Sgt. Paul, RQ-4 Global Hawk crew chief. “Every six months there is a new rotation with a new group of people who have helped maintain this aircraft since its arrival.”

Paul has been working with this aircraft off and on for just over nine months, most of which has been here in the area of responsibility.

A2019 also holds the record for the longest block 20 flight, which is currently set at 31.5 flying hours.

The Block 20 model began flying in 2004 and was initially fielded with imagery intelligence (IMINT)-only capabilities. Three Block 20s have been converted to an EQ-4 communication relay configuration, carrying the BACN payload. 95 percent of its flight time has been accumulated since it was reconfigured with the BACN payload in 2010.

“This highlights the proven reliability of unmanned systems and the advantages they can provide,” said Anthony. “Although other aircraft also carry the BACN payload, the RQ-4’s 30+ hour endurance is ideal for this communication bridging mission.”

“This milestone is paving the way for other aircraft and the future of other unmanned aircraft systems,” said Paul.

Anthony said it isn’t just the team here that made this milestone possible.

“I’m fortunate to have been part of this historic event and enjoyed celebrating with all the maintainers and support crews who make it happen daily,” said Anthony. “Grand Forks and its sister units at Beale AFB, Calif., have their own teams of maintainers and communication support personnel that enabled this milestone too. It’s a whole new paradigm that I’m still getting used to, and the beginning of a new era in aviation.”