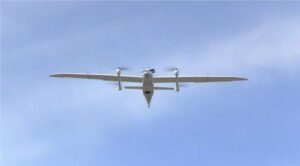 Arcturus UAV has announced major upgrades to their JUMP™15 Fixed Wing VTOL UAV. The JUMP 15 has been fitted with a completely new wing, designed specifically to maximize endurance and efficiency in JUMP CONOPS. Arcturus has also converted the JUMP 15’s ultra reliable Honda 4-stroke engine to fuel injection. The new EFI engine operates with greater fuel efficiency and allows for higher density altitude operation. In a newly released video Arcturus shows the JUMP 15 integrated with a TASE 200 EO/IR gimbal stabilized sensor. In this configuration the JUMP 15 has demonstrated 6 hours of endurance.

According to Arcturus, JUMP™15 enjoys all of the versatility of a quad rotor while retaining the superior range and endurance of a fixed wing. It requires no special launch equipment and does not require runways for launch or landing. The JUMP 15 can be easily transported and operated by only two technicians. Once on site, it can be set up and ready for flight in less than 15 minutes.