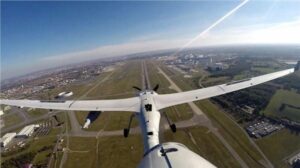 Sagem, an electronics and avionics company that is part of the Safran group, has completed a series of flight tests demonstrating the feasibility of integrating a drone into a shared (manned/unmanned aircraft) airspace, in compliance with civil aviation regulations and air control procedures. The series of about 20 flights used the company’s Patroller drone, and took place near Toulouse from October 26 to November 7. It was carried out within the scope of Europe’s SESAR program. Sagem is teaming up with the French air navigation and safety agency DSNA (Direction de la Sécurité de la Navigation Aérienne), the laboratory run by the national civil aviation school ENAC (Ecole Nationale d’Aviation Civile) and Rockwell Collins France through the ODREA project [1].

Sagem demonstrated a complete anti-collision function during these flights, one of the keys to integrating drones in a civilian airspace shared with manned aircraft. The “see and avoid” system, developed by Sagem and integrated in the Patroller’s control system, combines traffic detection sensors, including an infrared optronic (electro-optical) sensor, and an automatic risk collision estimation and avoidance flightpath generation module. During the flight tests, this system was successfully operated using different conflict scenarios with a “dummy” aircraft provided by ENAC, thus enabling Patroller to detect the risk of a collision and avoid it, without requiring an operator.

The ODREA project also demonstrated Patroller’s ability to carry out approaches to the Toulouse-Blagnac airport according to procedures defined by air traffic control (ATC). This demonstration confirms that a drone is capable of operating in the terminal zone of an international airport, without impacting traffic or safety.

The series of demonstration flights, a real first in Europe, followed a major simulation validation project by the ODREA consortium. It marks a major step forward in demonstrating the state-of-the-art technological solutions for integrating drones in civilian, non-segregated airspace.

Developed in France by Sagem, the Patroller is a 1-ton class tactical drone system carrying multiple sensors. Because of its modular design it can carry a payload of up to 350 kg, in the fuselage or in pods (optronics, radar and electronic warfare), and offers 20-hour endurance with a ceiling of 20,000 ft. Sagem deploys the full range of expertise needed to develop and build modern drone systems: day/night gyrostabilized very-high-precision optronic assemblies, real-time data transmission, inertial navigation and flight control, ground segments, mission planning and playback, systems integration and interoperability with the joint services allied digital battlespace.

[1] SESAR (Single European Sky ATM Research) is a European program that aims to modernize civilian air traffic management. It is financed by the European Commission and the RTE-T, the trans-European transport network. ODREA stands for Operational Demonstration of RPAS (remotely piloted aircraft systems) in European Airspace.