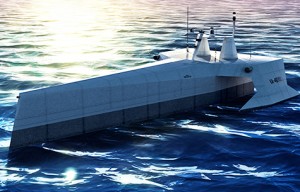 Manned vessels are obliged to obey a set of navigation rules published by the International Maritime Organization. Generally referred to as COLREGS (collision regulations), those rules determine in the event of an encounter between vessels, which vessel has the right of way (the “stand on” vessel) and the appropriate behavior for both the “stand on” and “give way” vessel to avoid a collision.

The Leidos strategy to evaluate the prototype ACTUV autonomy system for COLREGS compliance includes both simulation and at-sea testing. The team has completed approximately 26,000 simulation runs of the system. Testing of COLREGS involves the ACTUV surrogate and one interfering vessel in a variety of meeting, crossing, overtaking and transit scenarios in both simulation and on the water test events.

During 42 days of at-sea testing that included 101 individual scenarios, the autonomy system directed course and speed changes of the surrogate vessel to stay safely outside a 1-km standoff distance from the interfering vessel. The test program demonstrated the ability of the ACTUV autonomy system to successfully maneuver and avoid collision with another vessel and paves the way for follow-on testing involving multiple interfering contacts and adversarial behaviors of interfering vessels.

While continuing to use the surrogate vessel to test ACTUV software and sensors, construction of Sea Hunter, the first ACTUV vessel, continues at Christensen Shipyard in Clackamas, Oregon. Sea Hunter is scheduled to launch in late summer 2015 and begin testing in the Columbia River shortly thereafter.