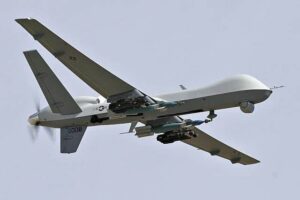 In collaboration with the Federal Aviation Administration (FAA) and Honeywell, GA-ASI tested a proof-of-concept SAA system, marking the first successful test of the FAA’s Airborne Collision Avoidance System for Unmanned Aircraft (ACAS X U ). The company also performed the first flight tests of a pre-production air-to-air radar for SAA, called the Due Regard Radar (DRR), making it the first radar of its kind designed for a RPA.

A functional flight test of GA-ASI’s SAA system—which includes automatic collision avoidance and a sensor fusion capability designed to provide the pilot on the ground with a clear picture of the traffic around the aircraft—occurred September 4, 5, and 10 at GA-ASI’s Gray Butte Flight Operations Facility in Palmdale, Calif. onboard a Predator B RPA. During the test, Predator B proved the functionality of ACAS X U during collision avoidance maneuvers against ADS-B and transponder-equipped aircraft executed automatically onboard the RPA with the pilot ready to override the system.

Automatically executing collision avoidance maneuvers will enable Predator B to maintain safety in the National Airspace System in the unlikely event of a loss of the command and control data link. ACAS X U is specifically designed to be interoperable and backwards compatible with Traffic Alert and Collision Avoidance System (TCAS) II, which is the worldwide collision avoidance system used on most commercial transport aircraft.

GA-ASI is currently working with NASA to integrate the proof-of-concept SAA system aboard NASA’s Predator B, called Ikhana. Ikhana will serve as the primary test aircraft in a SAA flight test scheduled to take place this month and next at NASA’s Armstrong Flight Research Center in Edwards, Calif. The flight test campaign will evaluate the SAA system in a wide variety of both collision avoidance and self-separation encounters and will include a sensor fusion algorithm being developed by Honeywell.

Meanwhile, DRR testing has been occurring at various locations across Southern California this year onboard a Beechcraft King Air in an attempt to detect and track multiple test aircraft across the full Field-of-Regard, including General Aviation aircraft beyond ten miles. The tests are the first in an extensive flight test campaign designed to develop the Engineering Development Model (EDM) DRR fully and make it ready for flight testing on Predator B.

The ultimate goal of GA-ASI’s SAA program is to enable “due regard” operations in international airspace and routine access in non-segregated civilian airspace in the U.S. and around the world. The company’s pioneering efforts commenced in 2011 and have included the successful demonstration and follow-on integration of Automatic Dependent Surveillance-Broadcast (ADS-B) onboard the Guardian RPA, the flight test of a SAA architecture and self-separation functionality on Predator B, and testing of a prototype DRR on a Twin Otter aircraft and Predator B.