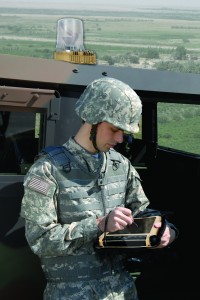 Textron Systems Unmanned Systems, a Textron Inc. business, has commenced deliveries of the One System® Remote Video Terminal (OSRVT™) -50 variant to the U.S. Army. The -50 configuration is the first fleet-wide update to the OSRVT program of record that enables Level of Interoperability (LOI) 3, a bi-directional capability which allows users in the field to control the unmanned aircraft’s payload for greater situational awareness and better-informed decision-making in kinetic operations.

Under an ongoing support contract, Textron Systems anticipates upgrading more than 3,100 OSRVT systems to the -50 configuration for the U.S. Army, Marine Corps and Special Operations Command, beginning now and ongoing through 2016. This configuration will undergo initial operational testing in 2015, and give Army units enhanced interoperability with Gray Eagle®, Hunter and Shadow® unmanned systems. The Shadow Tactical Unmanned Aircraft System, a Textron Systems platform, is utilized by the Marine Corps and Special Forces groups as well.

The OSRVT -50 incorporates many enhancements for greater flexibility, functionality and ease of use. Software upgrades to a service-oriented architecture (SOA) enable more rapid insertion of new features and technologies as requirements evolve. The user interface is updated for easier configuration, intuitive controls and touch screen operations, as the system will also now be fielded in a ruggedized tablet format.

“The OSRVT -50 configuration will allow our U.S. Army and Marine Corps customers to align situational awareness from their unmanned systems even more seamlessly into their decision-making,” said Vice President, Ground Control Technologies Wayne Prender. “With thousands of fielded units logging countless service hours around the world, we are enhancing a trusted platform to put even more capability into the warfighter’s hands — whenever and wherever it’s needed, in real time.”

The OSRVT is part of Textron Systems’ larger family of remote products, based on a modular, SOA-based software architecture that is ported easily to the hardware and form factor the customer requires for military, civil and commercial applications around the world. In addition, the extensible architecture allows the system to be highly customized while still being delivered and fielded rapidly. Solutions can be specified in various form factors, and can deliver LOI 3 or higher, providing even greater levels of situational awareness, payload, and platform control based on evolving operational requirements.