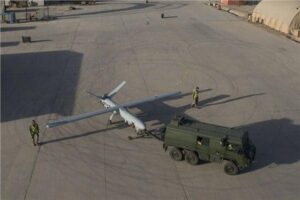 The UK’s Defence Secretary, Michael Fallon, has announced that the Watchkeeper UAS has carried out surveillance tasks in Afghanistan.

During a visit to Kabul alongside the Chief of the Defence Staff, General Sir Nicholas Houghton, Mr Fallon said: “Watchkeeper is the first unmanned air system developed and built in the UK to become operational and will be a significant surveillance and reconnaissance capability for the Army for years to come. There is no doubt that it will prove to be a battle-winning technology.”

General Houghton said: “The enhanced real-time situational awareness Watchkeeper provides means that our local understanding is greater, our tactical decisions better informed, and that, ultimately, personnel on the ground are safer.”

Watchkeeper pilot and payload operator, Sergeant Alex Buchanan, said: “It’s been a real privilege to be the first to fly the Army’s new Watchkeeper remotely-piloted air system on operations. It’s an amazing capability and has already provided important information to troops, enhancing the safety of everyone that lives and works at Bastion.

The video and images we provide are a bit like what you might have seen during police chases on TV; the main differences are the videos and pictures are a much higher resolution and we fly the aircraft from a control centre on the ground.”

Gathering crucial information from the battlefield, Watchkeeper, built by Thales UK, will provide UK troops with life-saving surveillance, reconnaissance and intelligence. It will also give personnel on the ground greater situational awareness, helping to reduce the risk of threats.

Following the handover of Camp Bastion, the UAS will return home to Wiltshire where Royal Artillery troops will continue to train with the system in restricted airspace over Salisbury Plain.